The Messenger comes to Game Pass – as many more titles leave

One of the issues with subscription services is that subscribers never truly own the games – they merely own a licence to play the games for a limited time. Because of that, games often come and go from these services. Microsoft has now announced which games are coming soon to Game Pass, but also which ones will be leaving.

Announced on its blog, the games coming to Games Pass are: 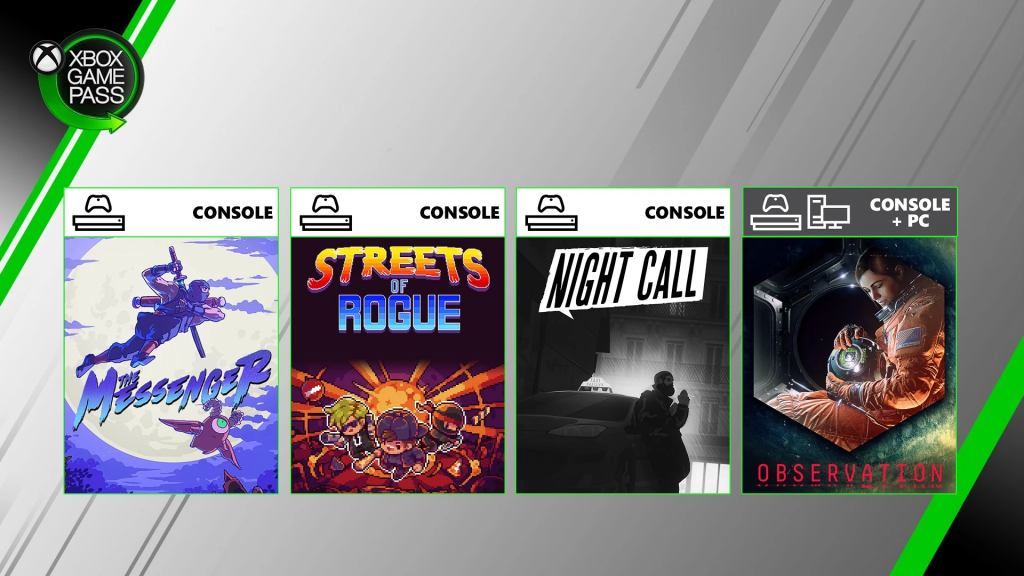 Night Call is arriving on the 24th of June for console. As a taxi driver in Paris, you “pick up passengers, listen to their stories, and gather clues to solve a mystery in three unique cases.”

Observation is coming to console and PC on the 25th of June, and is described as “A sci-fi thriller uncovering what happened to Dr. Emma Fisher, and the crew of her mission, through the lens of the station’s artificial intelligence S.A.M.”

Streets of Rogue is also arriving on the 25th (though only for console), and is a top-down rogue-lite set “in a functioning, procedurally generated city, where complex AI informs denizens from all walks of life who are going about their daily activities.”

The final game arriving to Game Pass is The Messenger. Already available for PC subscribers, The Messenger is coming to Xbox on the 25th of June. The game first presents itself as a classic action platformer, but later “unravels into an expansive time-traveling adventure full of thrills, surprises, and humor.”

The games leaving the platform on the 30th of June meanwhile are:

Though it is disappointing to see larger titles such as Metro Exodus and Life is Strange 2 leaving the service, Microsoft is consistently adding new titles to Game Pass (such as Kingdom Hearts and No Man’s Sky earlier this month), so even if none of the new additions appeal to you, there likely will be next time.

KitGuru says: What do you think of these additions? Are you subscribed to Xbox Game Pass? Have you played Life is Strange 2? Let us know down below.