Technically, the reason KitGuru spent 18 hours travelling to the other side of the planet was the MSI Beat IT 2014 Gaming Finals. Along the way, we got first hands on a brand new laptop, graphics card and main board. In our final ‘live' report, we cover the gaming itself. It would be rude not to.

This year saw the 5th anniversary of the tournament and it has been growing steadily. According to all of the gamers we spoke with, what made this event so special was the fact that MSI managed to get almost 800 teams to enter from around the world.

Organizational expertise was provided by Fnatic, MSI's pro-gaming partner and a source of many product innovations in recent years. The setting was Taipei, which meant that the sponsors involved (MSI, Intel, nVidia, Blizzard etc) all had strong representation on hand. You can get an idea of the set-up from this lush video:-

When you're dealing with amateur gamers, you can get a huge number of entries either by marketing your event in a smart way or by appealing to a specific community.

Pro-gamers are different. Without meaning to be disparaging, they are predators. They react to ‘blood' – and the blood for a major tournament is the prize pot. For MSI Beat IT 2014, that prize pot topped the $113,000 mark. Healthy enough to attract a significant amount of gaming talent – with close to 800 teams applying for a position in the regional heats when the tournament was announced.

The opening ceremony featured Intel and nVidia among others – and the very well received MSI Dragon Ladies. The stage itself could easily be described as ‘fully loaded' and if a rock band had taken to the stage we would not have been surprised. As it was, the musical fair was a strict diet of hardcore trance. 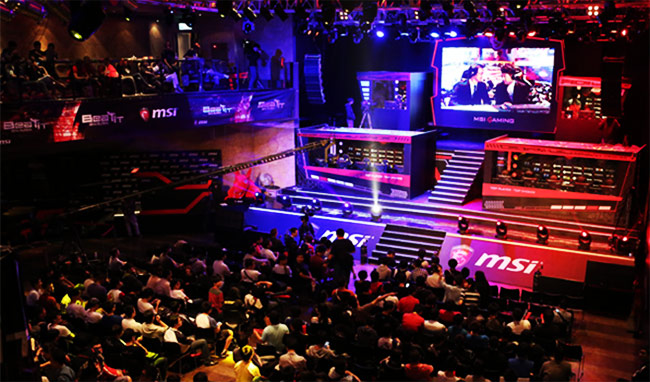 In the StarCraft 2 tournament, the Asian/Pacific players ripped through the competition during the first day heats – not a Brit/German/American to be seen in this line up for day 2, but it was a lot tighter in DOTA2.

Just to give you an idea of how far/fast these players have developed – former world number one StarCraft player Flash was pretty much blown away on the opening day of SC2 – and the guy who beat him didn't even make it to the last day. He got creamed 3-1 by Solar, who would go on to take victory in the final.

Holding down the honours for Europe were Virtus.pro from Russia in DOTA2. This team has been fielding winners for more than a decade – so they know how to get the job done against global opposition. In the finals, they edged out a strong challenge from Team Immunity – who had won the earlier qualifier for the Australasian region.

Again, one of the great aspects of this tournament was the way it genuinely brought together high quality gamers from across the globe. Chinese team CDEC managed an honourable 3rd place.

Picking up cheques for $5,000 each, you have to say that it was also a good weekend's work for the Russians.

KitGuru says: While eSports has developed a lot over the past 2 decades – and there is a lot of money in the sport – the roadmap for young gamers to achieve success and to understand exactly where every player around them is ranked – is not easy. Having a big technology company like MSI behind this kind of event can only help eSports going forward.

Let us know what you think about competitive eSports over on Facebook.