Windows 10 Xbox app is getting a pretty big update

The Windows 10 Xbox app is getting a pretty significant update, adding in a bunch of new features that Windows 10 Technical Preview users may have been waiting for. As part of the June update, Microsoft is adding in ‘game hubs’, which work the same way that they do on the Xbox One console, showing which friends played a specific title recently.

In addition, there is now a ‘Game Bar’, which lets you record clips and screenshots. Recording or capturing a screenshot can be triggered with a custom shortcut. There is also now better friend management. 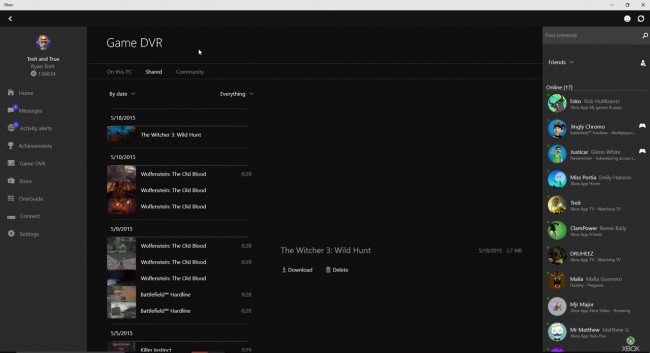 Users can now sort out their game clips properly for better organization and if you can’t quite reach your controller, you can now turn on your Xbox One from within the app. Similar functionality was also recently added to the Smartglass app, which allows you to control the Xbox One or Xbox 360 with a smartphone.

For now, game streaming is still nowhere to be found. However, E3 is just around the corner so we may hear some more about that then. It would also be nice if Microsoft could look in to PC to Xbox One game streaming, although nothing has been announced on that front just yet.

The Xbox app still has work to be done, including cross-platform gameplay, cross-platform party chats and streaming but it seems to be coming along nicely. Windows 10 is set to launch officially some time this summer.

KitGuru Says: Microsoft is doing some pretty exciting things with the Windows 10 Xbox app. I’m personally looking forward to cross-platform party chat and game streaming. Have any of you checked out the Xbox app on Windows 10? Are you planning on avoiding it?