It has been quite some time since we first heard about Microsoft’s upcoming Project Scorpio and while we have heard plenty of PR reps talk up the console, we haven’t seen much in the form of hard facts. Fortunately, it looks like that is starting to change as the first Scorpio specification leak has come through today, revealing some new details about the console’s hardware.

This week, DigitalFoundry was able to get its hands on a Microsoft white-paper, which outlines some of the technology behind Scorpio for developers. It does not offer a detailed breakdown of the GPU and CPU going in to Scorpio but it does outline a few key things, such as the removal of ESRAM, which has been causing Xbox developers some headaches since it was first introduced. However, the white-paper does make it clear to developers that “optimizing for ESRAM is critical” as future Scorpio games do still need to be playable on Xbox One and Xbox One S. 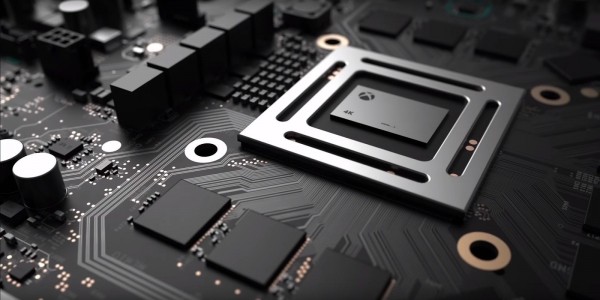 The second key piece of information revealed by the leaked white-paper is that the GPU inside of Scorpio is 4.5 times more powerful than the original Xbox One. The new GPU will also feature delta colour compression, which indicates that the architecture in use could be AMD’s Polaris or newer as it is a relatively recent addition to AMD’s feature set. This same feature can also be found on the PS4 Pro’s graphics chip, which is based on Polaris.

Microsoft’s key focus with Scorpio is achieving 4K gaming. However, things don’t necessarily scale linearly when making the jump from 1080p to 4K, according to Microsoft, an unnamed 1080p first-party Xbox title was able to run at 4K but the number of pixels processed only increased by 3.5 times. This is less than the 4x boost we see to display resolution when going from 1080p to 4K. However, not all Xbox One games render at full 1080p, with many settling at 900p and some falling further down to 720p.

For cases where native 4K is not possible, there will be a couple of techniques available. As DigitalFoundry’s Richard Leadbetter explains, Half-Resolution will allow Scorpio to use a 4K frame buffer but elements within the image such as ambient occlusion or shadows could be rendered at half of that. The second technique is Sparse Rendering, which is similar to Sony’s Chequerboard Rendering. With this technique, games will render at a lower resolution such as 3200×1800 or 2560×1440 and upscale to 4K resolution.

KitGuru Says: The leaked white-paper does provide some great insight into what Scorpio is capable of and how developers may choose to use the hardware. However, in-depth talk of techniques like sparse rendering do call into question Microsoft’s claims of a true 4K console, as many developers will likely choose to spend resources differently.