Among the overwhelming focus on games as a service alongside an epidemic of microtransactions, fans of CD Projekt Red couldn’t help but get worked up at the prospect of upcoming title, Cyberpunk 2077 following the same path. Worries can now be put to rest, as the developer has since taken to Twitter to reassure fans that it “leave[s] greed to others.”

The worry stems from reports of CD Projekt Red using online elements within its upcoming title, Cyberpunk 2077 to make it “commercially even more significant” than its previous game, The Witcher 3: Wild Hunt. The vague nature of these comments left little to be comfortable about, as the company is remaining tight lipped on what’s to come. 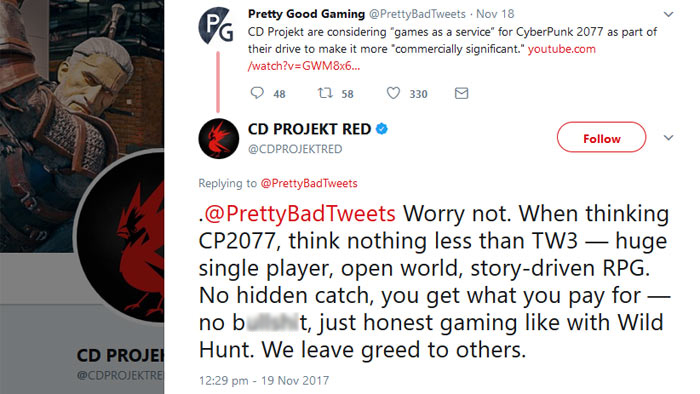 Worse yet is its timing, with triple-A titles such as Star Wars Battlefront II and Overwatch under investigation for its loot crates pertaining to gambling, and studios shifting focus to a ‘games as a service’ focus over traditional single-player experiences.

Luckily, in true CD Projekt fashion, the developer has quickly quelled these fears, tweeting “Worry not. When thinking CP2077, think nothing less than TW3 – huge single player, open world, story-drive RPG. No hidden catch, you get what you pay for – no BS, just honest gaming like with Wild Hunt. We leave green to others.”

KitGuru Says: And so continues the good will that CD Projekt Red has built up with its community. It will be interesting to see what the developer can do with its multiplayer/online elements in what is currently a broken system or extorting consumers everywhere. Are you excited for Cyberpunk 2077?