As part of the company's plan to boost UEFI adoption, Intel is working on ending legacy BIOS support by 2020. Intel's future platforms from 2020 onward will lack the compatibility support module (CSM), which is required to get some older operating systems and bootable devices running on newer machines, which feature UEFI.

Currently, PCs ship with UEFI but have BIOS support included for specific cases when users need to run software that depends on it. This can be enabled through the CSM, which will no longer be present on Intel platforms in a few years time. 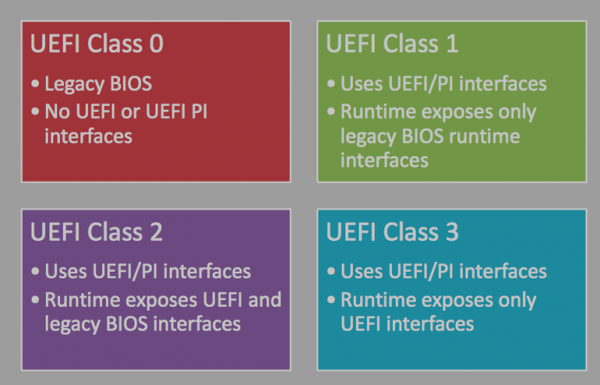 The change was made during a presentation by Intel's Brian Richardson. While Intel will begin requiring UEFI Class 3, it will not make ‘Secure Boot' mandatory, which means users will be able to run unsigned Linux distributions on PCs with UEFI. However, as lilputing notes, if you run into compatibility issues, you will have one less option for forcing it to work.

Intel's presentation notes that some users are still relying on legacy BIOS support for specific tools as they aren't compatible with UEFI. To get around this, Intel will be working with partners to “eliminate components with no UEFI support” and will try to “improve the user experience” for those using Secure Boot to install operating systems and other pieces of software.

KitGuru Says: These are Intel's plans for the time being, things could change as we get closer to the time, but for now, 2020 seems to be the year to phase out the legacy BIOS. At least, on Intel's new platforms from then on.