Although Death Stranding remains a complete enigma at this stage, it seems that break out studio, Kojima Productions is making good progress on the title. If the newly revealed casting of veteran voice actors Troy Baker and Emily O’Brien aren’t enough to get you excited about the mysteries that await, then comments from Kong: Skull Island director Jordan Vogt-Roberts might just do the trick.

The new casting choices were revealed via Emily O’Brien’s Instagram, when she posted a picture alongside known cast member Norman Reedus and newcomer Tory Baker. Before it was removed, the caption read: “Honored to be working alongside these two fine lads on Hideo Kojima’s new project Death Stranding. I’m a lucky gal ;).” 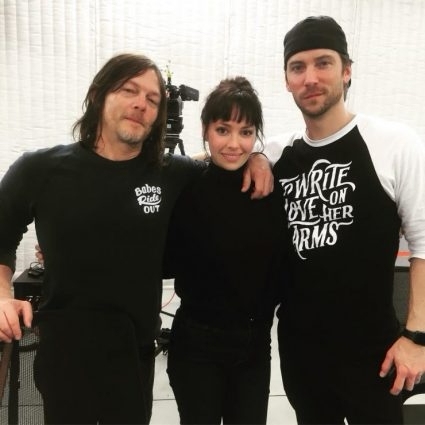 With an extensive list of credits, Troy Baker isn’t a surprising addition at all, especially given that he has previously worked with Kojima on Metal Gear Solid V: The Phantom Pain taking the role of Ocelot. O’Brien sports an impressive history of roles herself, having recently starred in Batman: The Evil Within, Dishonored: Death of the Outsider and the upcoming PlayStation 4 exclusive Days Gone.

The character in which these new actors will play are just as much a mystery as the title itself since the release of its full-length trailer during The Game Awards 2017. While he’s not able to shed any light on Death Stranding just yet, Kong: Skull Island Jordan Vogt-Roberts assures that it is definitely worth the wait.

Vogt-Roberts has remained close to Kojima since he has been tied to a silver screen adaptation of Metal Gear Solid, despite the latter having no part in the series since his departure with Konami. On a visit to seek Kojima’s advice, Vogt-Roberts was treated to witnessing Kojima direct first-hand, stating that the moment was “beyond special” and that fans should most certainly “get excited.”

Jordan came to see me at site. pic.twitter.com/S6R1C3EDRP

While there is no tentative release date just yet, it looks like fans won’t have to wait the long 3-5 years that are expected from a new IP as Kojima revealed in an interview with ComicBook.com that the team had “surpassed the experiment phase, and by entering the next step, we’re feeling the response to the new gameplay.” This has impressed Sony Interactive Entertainment (SIE), who claim to have not seen development at such a pace before.

Previous OnePlus offers HD streaming update for 5 and 5T smartphones, provided you send it in for servicing
Next Graphics card prices may continue to rise for most of the year