It’s safe to say that there’s a lot at stake during Dota 2’s biggest tournament, as The International pits teams against one another for parts of a $15 million prize pool. Unfortunately, Thunder Predator no longer has a shot at the winnings after one of its players was caught cheating in the qualifiers through the use of macros, resulting in a swift disqualification by Valve.

Macros are more common now than ever, enabling users to sequence a set of commands to the press of just one or two buttons, therefore streamlining the amount of effort it takes to execute a task. This can be used professionally while editing a photo, for example, or it can be used to give players an unfair advantage in-game.

In Dota 2, there are many heroes that require a lot of micromanagement where macros would come in useful, but few more so than Meepo – a Genomancer with the ability to create copies of himself that are each individually controlled. As Motherboard reports, Meepo was the choice of Thunder Predator player Atún in their third game against SG e-Sports.

Viewers of the match took to Reddit to complain about Atún’s unnatural ability to control the character in the heat of battle with unrivalled precision. For context, Meepo’s Poof ability allows the player to teleport one Meepo to another, often requiring a lot of back and forth depending on where the clones are scattered throughout the map. 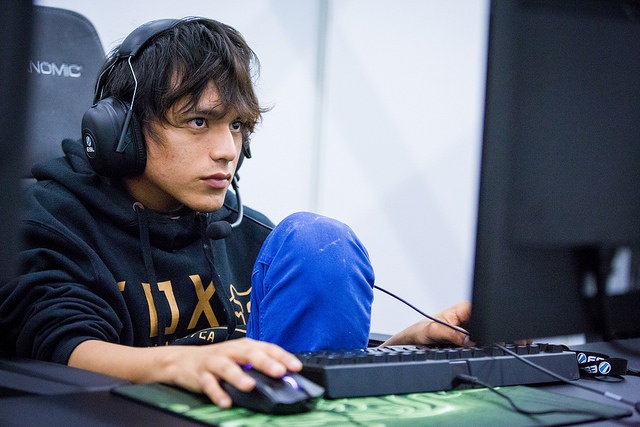 Upon further investigation of Atún’s moves, the combat log used to record all inputs into Dota 2 showed that all of Meepo’s clones teleported at the exact same time, with the commands given at just a fraction of the time it would normally take to execute the move. This is impossible without the use of a hardware or software-based macro in place, to which the team has admitted.

“The player of our squadron ‘Atún’ has a Razer Synapse mouse, which, like any professional player, has put its own manual configuration to be able to have a better use of Hardware in benefit of its efficient performance in each of the games played with this hero (Meepo),” reads the translated Thunder Predator statement. Despite the concession, the team still asserts that it did nothing wrong as “no type of hack has been used.”

Razer Synapse is a software that allows for the customisation of macros on Razer mice, among other tweaks and adjustments from DPI to the lighting of RGB-enabled devices. This constitutes as a software-based macro. It will, however, likely be stored in the on-board memory of the mouse depending on the model, meaning it could similarly be seen as hardware-based.

In the case of Thunder Gaming in SA Qualifiers, this is the decision that was taken:
A) Disqualify Thunder Gaming for using unfair advantage
B) SG vs Pain in the Winner’s Finals
C) Loser plays Torus in the Loser’s Finals
D) Winner of that Plays winner of A in the Grand Finals

Unfortunately, like most tournaments, macros are considered an illegal move in the competitive world. Qualifier organiser FACEIT could have stated this in a clearer manner, however its banning policy does outline that “all 3rd party software that is not allowed by the game publisher and that can give an unfair advantage to a player or team go under the cheating category.” Unfortunately for Thunder Predator, this has meant the team has been disqualified.

Interestingly, the South American team “denounces” the accusation despite outright admitting its wrongdoing, “affirming that at no time did our player ‘Atún’ use any type of hack or particular program that facilitated his game mode before the match, yesterday, with the SG team.”

KitGuru Says: I wonder what Thunder Predator thinks Razer Synapse is, if it doesn’t consider it a program that facilitates an unfair advantage. Despite joining the team just two months ago, Atún in particular has been playing tournaments since 2015, making it an even sillier thing to be disqualified on.