In its year and a half lifespan, Overwatch has developed quite the competitive scene, with many vying to earn a spot in the top 500. Unfortunately, the Top 500 is more like the Top 300, as many of the spots are occupied by alternative accounts, otherwise known as ‘smurfs’.

For clarification, smurf accounts are often created in competitive environments in order for a good player to play at a lower bracket. This is done for a multitude of reasons, such as having fun at lower skilled players’ expense or making it easier to rank up due to duping certain matchmaking systems.

A third reason would be for bragging rights, as shown by professional Overwatch streamer aimbotcalvin, who was caught bragging about how four of his accounts had taken spots in the top 20. In fact, three of those accounts occupied the top 10. This attracted criticism from his viewers, who stated that he was taking those spots from more deserving players, to which he mockingly replied “earn it,” followed by the typical insult you hear from the online world. 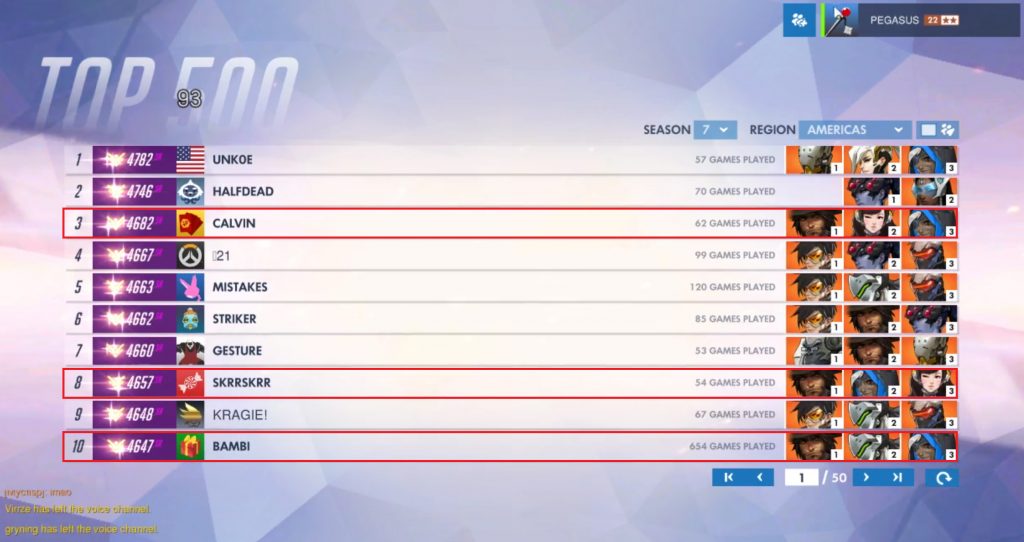 This has created a dialogue across the competitive scene between pros and even casual players, to which Kotaku has followed and documented. Many fall in line with aimbotcalvin, such as McGravy, the team captain of pro team Envision who tweeted “If you are good at the game, it is not hard to get top 500 even with smurfs taking up 100+ spots. If you are complaining, you are bad. End of story.”

Of course, no one is denying that aimbotcalvin and, presumably, McGravy have earned their spots in the Top 500 as it does take skill to be there. The conversation is more concerning those that can’t break into the bracket because the Top 10 can dominate the Top 100 spots between them. Some even argue that the gap between 200 of the spots can be determined by roughly three to four wins, making it a lot more difficult.

Pro player Emongg seems to agree with the criticism and has stated that he is going to neglect all of his smurf accounts until they fall out of the Top 500, leaving just one deserving account in there. Overwatch implements a rank decay system, which by definition will help Emongg’s smurfs drop off in no time so long as he doesn’t give them attention.

None of this is breaking the rules exactly, but there is a moral fine line being exploited for the gratification of occupying so many spots. This is something Blizzard likely didn’t intend, even with their relaxed policy on smurf accounts, prompting players to suggest authentication systems to begin weeding out multiple accounts.

Blizzard has yet to address the situation and it is unknown if any action will be taken to change one player occupying almost a third of the Top 10.

KitGuru Says: While I can admire the skill taken to get so good at a game, I can’t admire the lack of sportsmanship from the competitive scene. The Top 500 becomes a parody of itself if it doesn’t occupy 500 individual players, but perhaps that’s just a personal opinion. What do you think about smurf accounts? Do you agree that aimbotcalvin has earned his four Top 20 spots or should pro players make way for other pros to gain the same achievement?