At the end of February, Amazon-owned Twitch announced that it would be giving more to its Prime subscribers, allowing members to vote for the indie title they wanted to receive each month with its Twitch Prime Indie Amplifier program. Now, Prime members are getting even more, as Twitch has announced its new Free Games with Prime initiative.

Starting tomorrow, on March 15th, Amazon Prime members who have linked their Twitch accounts will be receiving Superhot, Shadow Tactics, Tales from Candlekeep, Oxenfree and Mr. Shifty all for free. April’s lineup has also been revealed, with members getting their hands on Tales from the Borderlands, SteamWorld Dig 2, Kingsway, Tokyo 42 and Dubwars.

The Free Games with Prime initiative is expected to be an ongoing scheme depending on the response of fans, with all eight games included in the Indie Amplifier program set to be made available in no particular order over the next few months. 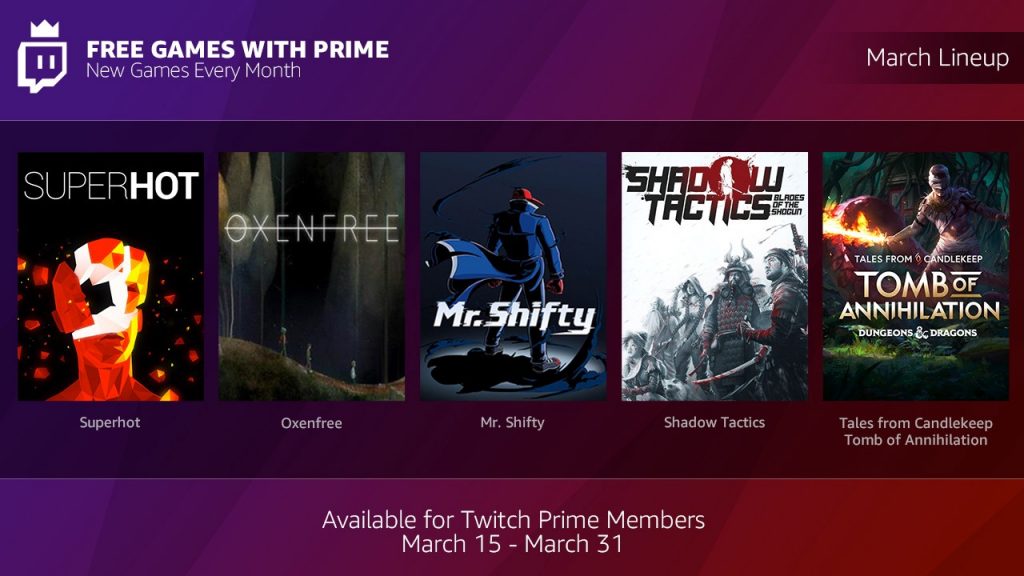 Twitch has revealed that all games are “FREE and yours to keep forever,” hinting that these games could possibly stay in the user’s library regardless of whether a subscription is active or not. This would contrast already established initiatives on console, such as Games with Gold on Xbox or games with PlayStation Plus.

Previous freebies given away by Twitch have requires users to download the Twitch desktop application, however the platform hasn’t revealed how it will be distributing its games just yet.

For those interested, Twitch Prime is included with Amazon Prime memberships, costing an annual fee of £79/$99 or a monthly fee of £5.99/$12.99. Students tend to get a large discount on the annual pricing.

KitGuru Says: As a Twitch Prime member, I am happy to be getting even more back for the money I’ve paid. It looks like Twitch is set to roll with critically acclaimed games, even if they aren’t the newest titles out there, meaning there is value to the initiative. What do you think about Twitch’s Free Games with Prime initiative?