Update (09/11/18): Reports emerged that YouTube would finally come to Nintendo Switch this week, a year and a half after the hybrid console first launched. Fortunately, the rumours were true, as Nintendo has officially unveiled the application in its eShop.

Ever since its March 2017 release, fans of the Nintendo Switch have been befuddled at lack of multimedia application support given that the device is primed for portable video consumption. This has all changed, as Nintendo is now allowing its users to “enjoy entertainment like music videos and shows, plus gaming livestreams, how-to guides and much more” on Switch devices.

While YouTube has appeared on past Nintendo consoles, it was a considerably lag-filled experience when compared with PlayStation 4, Xbox One and smartphones. It seems as though the Switch version is a step up, with an easy touchscreen-enabled interface and swift interaction.

Alongside KitGuru’s YouTube channel, Switch owners will be able to kick back and view anything from their favourite content creators, as well as indulge in a limited library of full movies while on-the-go. Of course, this is provided that the Switch’s battery holds out.

Hopefully this paves the way for Netflix, Amazon Prime and other providers in the near future.

Original story (05/11/18): Over half way through its second year, the Nintendo Switch still has yet to debut core video applications YouTube and Netflix. Although the latter is still long-absent with no sign of impending release, a new rumour suggests that YouTube might finally be arriving on the platform this week.

A YouTube application icon was reportedly found by a channel named NintendHOME, within the recommended app section of Nintendo’s official website. Although this cannot be found at the time of reporting, Nintendo could have easily nipped it in the bud after it was publicised on Twitter and ResetEra. 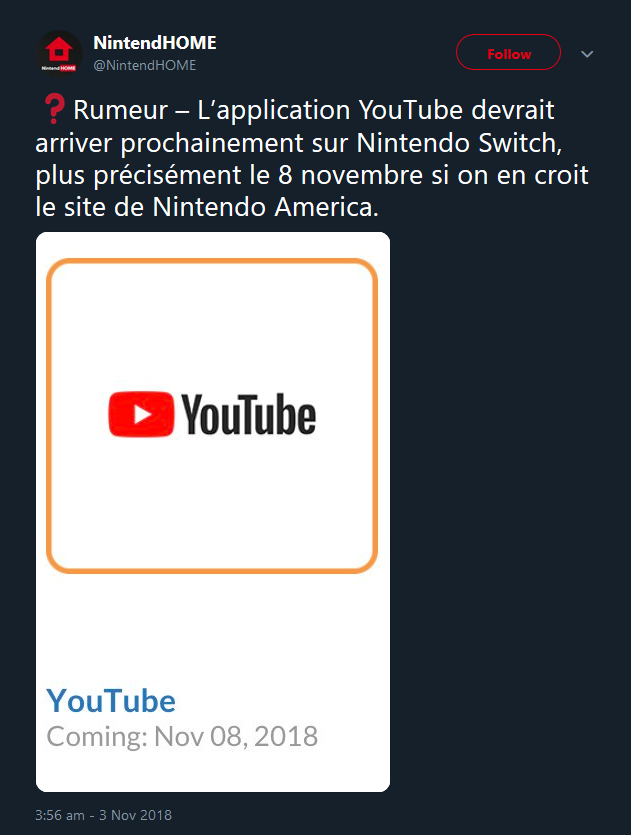 “Rumor – The YouTube app should arrive soon on Nintendo Switch, more precisely on November 8, according to the Nintendo America website,” reads Google translate. This was further endorsed by an admin of ResetEra, who seemingly confirmed its accuracy and expressed their excitement.

Of course, we’ve heard this all before. YouTube was rumoured to arrive alongside Netflix during Nintendo’s E3 presentation earlier this year. Unfortunately, neither application appeared during the platform’s panel. Given the lack of supporting evidence towards this new claim, the same doubt should cartainly be cast here.

Still, we won’t have long to wait as November 8 is just a few days away.

KitGuru Says: In my opinion, it’s just a matter of time before YouTube reaches the Nintendo Switch, so it would be of no surprise to see it finally land after a year and a half wait. Are you excited for video applications to start debuting on the hybrid handheld?