Update: Zofia has now been officially announced on Ubisoft’s Rainbow Six website, confirming the leaked leaked screenshots shown below. It is likely that there will be more leaks in the coming days, although a full reveal is set to fall later this week on the 19th.

As Rainbow Six Siege approaches this season’s Pro League Finals, attention is turned to what operators Ubisoft could possibly reveal in the way of new operators. Just days after the upcoming South Korean attacker, Dokkaebi, was leaked, we have our first look at the next GROM attacker, Zofia.

The Polish Season was delayed and reorganised back in Year 2, Season 2, replaced by Operation Health, which Ubisoft stated was for the longevity of the game. The content was chopped up, and while the map was scrapped, the GROM operators were split between Season 3 and the upcoming Season 4. We saw defender Elżbieta “Ela” Bosak make her way first, introduced in Operation Blood Orchid, dubbed “The Bosak Tempest.”

Fast forward a few months and Ubisoft has given us our first look at the remaining GROM operator, The Bosak Anchor. This first appeared on the main page of the game saying: 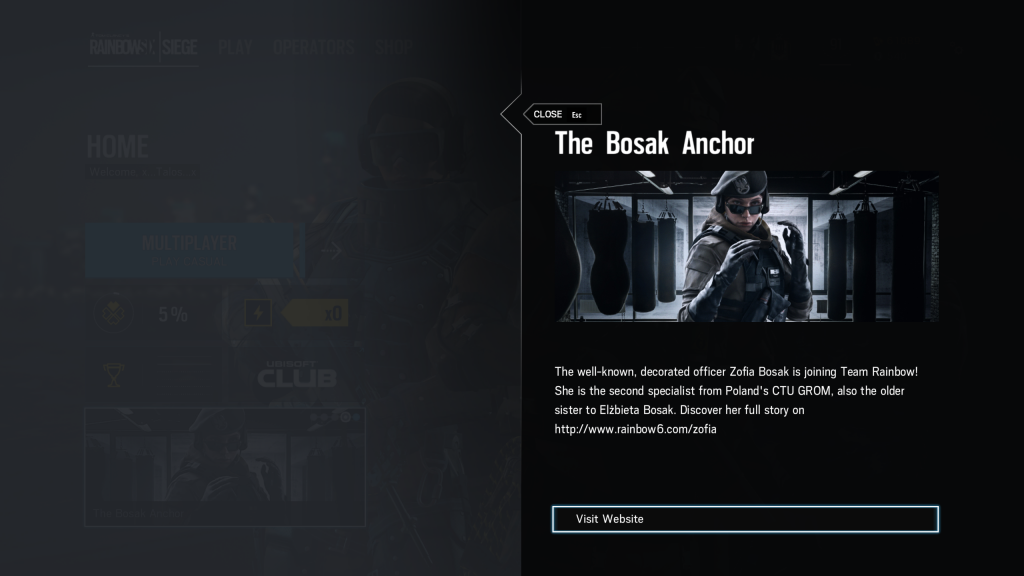 “The well-known, decorated officer Zofia Bosak is joining Team Rainbow! She is the second specialist from Poland’s CTU GROM, also the older sister to Elżbieta Bosak (A.K.A. Ela).”

Originally the link shown in the above screenshot resulted in a redirection to an Assassin’s Creed Origins promotion, which provoked jokes that the next operators introduced in Year 3 would be Egyptian. In reality, it is more than likely a result of a bad URL redirecting to the primary Ubisoft domain until Zofia had received her official reveal.

There was a little confusion about ‘anchor’ being in her title as to whether there would be two defenders in one CTU, but this is believed to be in relation to family terms. Zofia is a lot more centred than her wild sister, Ela, being more anchored than her ‘tempest’ sister who is as chaotic as a storm itself.

Since then, an overwhelming amount of information about the operator has come to light, including a detailed story about Zofia’s history before joining Team Rainbow, including a strained relationship with Ela, her being a mother and her father falling in with the wrong political crowds. More interestingly, her loadout has been revealed and confirmed.

Zofia is a two speed attacker with the choice between breaching charges or claymores. Players will get a choice between the LMG-E and M762 for her primary weapon, while the RG15 handgun is her secondary. Her gadget is the KS79 LIFELINE, a double barrel grenade launcher that doesn’t need to be reloaded and fires “electronically triggered projectile technology.” This is a concussion grenade, which doesn’t sound too different from Ela’s gadget. It “delivers a 170-decibel shockwave that impairs hearing and causes a dizzying effect.” The impact ammunition, however, blows up walls and is therefore a lot more lethal, so stand back while firing. It sounds to me like players will switch between ammunition similar Capitão’s various bolts, giving Zofia some versatility.

Ahead of the Pro League tournament, where we will find out more information on Zofia and the other operators, Rainbow Six Siege is experiencing a free week on all platforms. If you’ve not tried the game, now would be a great time to dive on in.

KitGuru Says: If all this information sticks, and it does align quite well with everything we’ve heard so far, then Zofia sounds like a good fit for Team Rainbow. Do you like the sound of the new operators so far?