As much as I've talked about Evolve already, we still don't know a lot about it. Sure there's a few hunters we know by name and there's the hulking Goliath, but that's all we know about the opposing teams, who've only battled it out on the one map – so far. In this latest video from developer Turtle Rock, we see a whole new band of hunters, that change the game up from the original four, as well as a new map to explore and chase down their prey on.

Gamespot got the scoop on this one, the lucky buggers:

In the above video, we see our new band of hunters taking on Goliath in a much more contrasting setting than the original map. There's still a mix of jungle and industrial setting, but the areas seem much more wide open, apart from a few key choke points. It seems like there's more potential for both sides to lay ambushes, but they'll have to be careful, as those big courtyard like areas could allow for whichever team is more powerful to gain a significant advantage.

However, the big crux of the video are the new hunters, which are variations on the original four classes. The new assault, is Hyde, who's kitted out with a minigun instead of a electric rifle and throws out toxic grenades which let him test for a hidden monster in the undergrowth without charging in himself. He also has a flamethrower with a massive damage output, but it does require getting in close.

The new medic class is Lazarus, a much more burly looking medical officer. While he can't heal his teammates as well as his female counterpart, bringing them back is much easier. Described by Turtle Rock as a “space necromancer,” he's great at reviving teammates and can do so stealthily thanks to his personal cloaking device. 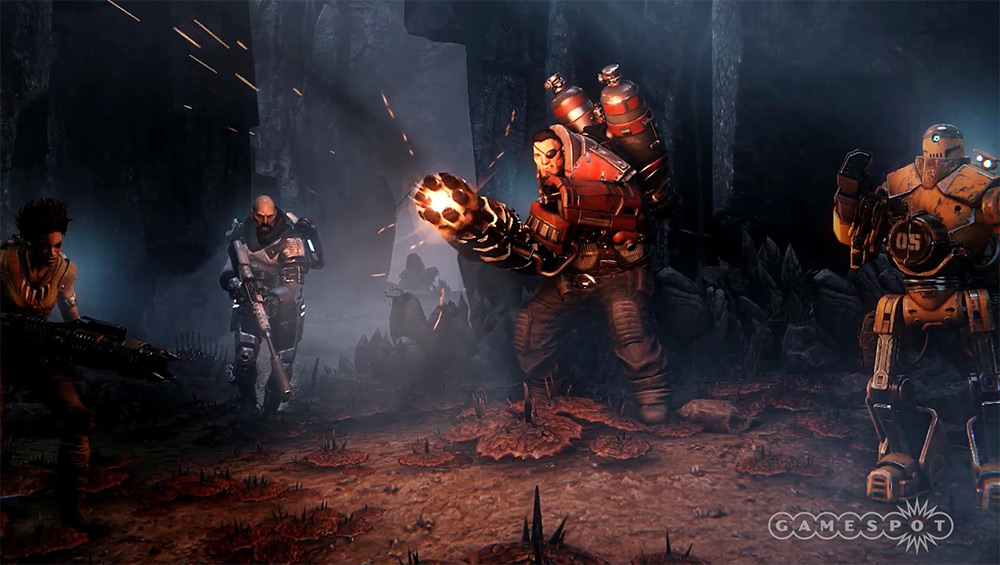 Maggie changes the game quite a lot, by bringing her very own pet Trapjaw with her – and opening up Evolve to a whole host of potential animal companions – called  Daisy. Daisy is able to track the monster by smell, working like a bloodhound to chase it down, as well as offering some level of protection from the local wildlife. Don't worry too much if she gets hit, as she will respawn in time.

Along with her canine pal, Maggie can also lay down harpoon mines, which work like the other trapper's main harpoon gun, but are triggered by the monster passing over them so they aren't quite as active and require more strategy to draw the monster into your trap.

The last new character is the robotic Bucket, who is a support option. Instead of packing a personal shield, he's able to detach his head and send it off like an unmanned drone. Holding the camera on the monster for a few seconds will alert the other teammembers where it is so they can chase it down. When it comes to killing it, he can lay down up to five remote turrets, all packing miniature machine guns to do a bit of extra damage.

All in all, these new hunters add a lot to the mix, giving the potential for combinations of hunters a big boost. Chances are we'll see more in the future too, so the different team variations could end up being huge.

KitGuru Says: What do you guys think of the new hunters? Maggie is probably my favourite, just because I want to run around with an alien dog on my side.