If you're a fan of indie horror games, then chances are you've heard at least a whispered mention of Five Night's at Freddy's, a game that has you defending yourself from animatronics, that while designed to entertain the customers of Freddy Fazbear's Pizza, have a penchant for going walkabouts at night and jump-scaring you. You don't do it by pulling out their batteries though, but by watching them on a number of security cameras to try and spot when they're coming for you. 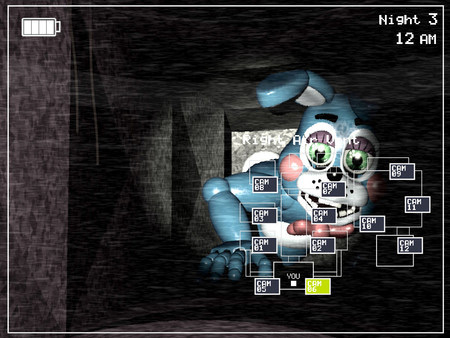 Despite being a low budget indie game, it did very well indeed. So well in-fact, that it spawned a sequel and just a few months after the original game's release, it's already passed through Steam Greenlight and is officially on sale.

The setting for this game is the same as the first, though updated. Your character from the prequel survived the five nights – including the bonus level, apparently – and has now been moved to the day-shift, so it's your job to take on the vacated role of night (camera) watchmen. Fortunately the animatronics have been upgraded, but your doors are gone now so avoiding their frantic leaps in your direction may be a little harder this time.

Kitguru Says: As if I'm not spending enough time looking over my shoulder at the moment courtesy of Rift enabled Alien Isolation…