Squad’s Kerbal Space Program (KSP) is one of those games that you can get truly lost in. One minute you’re just tweaking the radial-chute placement on your latest rocket and the next, two hours have gone by and you’re trying to use your astronaut’s jetpack to push your stricken craft on its retrograde vector into a sub-orbital trajectory.

But of course those are terms most of us wouldn’t even know if it wasn’t for other people telling us how to play. Indeed while deep and engaging, Kerbal Space Program has a bit of a steep learning curve. There are tutorials that cover the basics, but really, without an astrophysics degree, you’ll struggle to get much beyond the atmosphere of Kerbin. Of course most of us don’t have time to go back to school just to play a PC game, so we turn to others more learned than ourselves and their instructional let’s plays to help us out.

This isn’t that uncommon with a lot of games, especially Early Access ones that haven’t been fully fleshed out with proper tutorials or official strategy guides, but rarely do we see a game that’s unofficial instruction manual was written by one man: Scott Manley. Sure there are a lot of other KSP video makers out there, many of them with excellent advice, but they’re often far greener than our interviewee today. He’s been around since the early days of the game and helped brave the cold depths of space at a time in its development when it wasn’t even known if it was possible to orbit your home world.

Today his techniques, tips and tutorials have become such a part of the game’s community, that read any forum discussing it and you’ll often see references to the “Manley Method,” or some other reference to masculinity and space travel in the same sentence.

With that in mind, we reached out to Mr Manley and managed to rope him into a digital sit down to explain how exactly he got involved in the KSP scene and what plans he has for the future of his Kerbal Space Agency.

KG: Hey Scott thanks for chatting with us today. That is your real name I take it?

SM: Yes, that is in fact my real name, there’s still quite a few people who think it’s a made up pseudonym designed to reflect my manly Scottishness, but it’s the name I was born with. 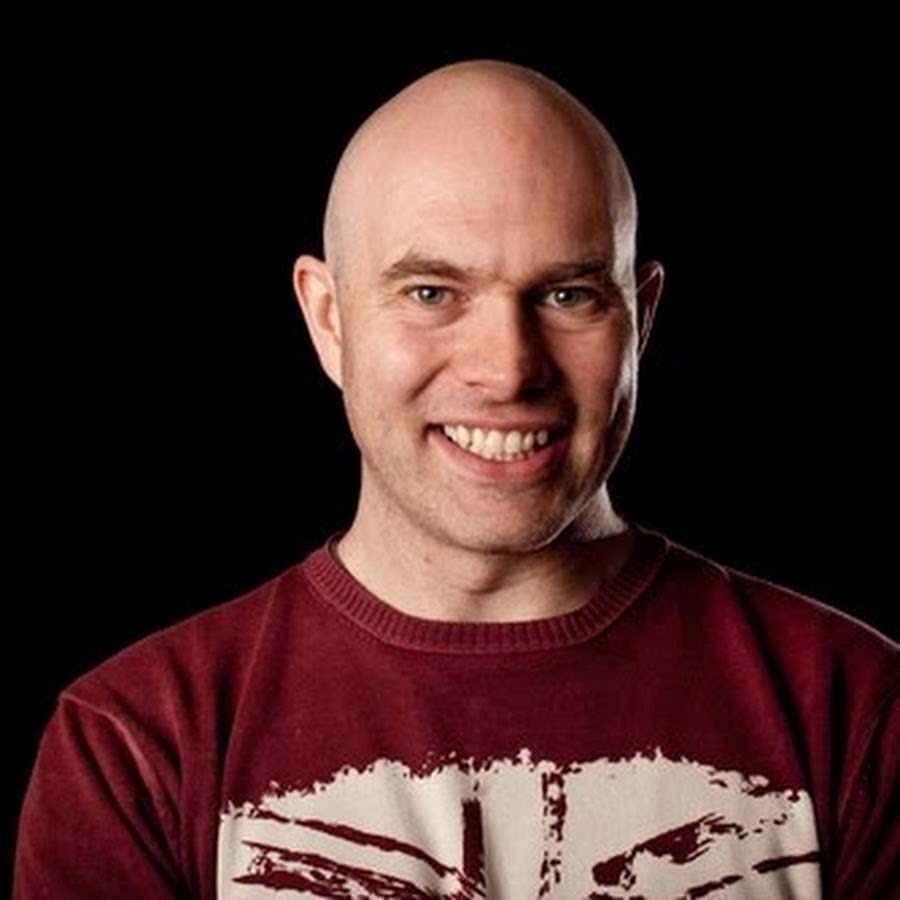 Google image search Scott Manley at your own risk. He assures me, as flattering as the images are, they’re not of him

KG: You’ve been involved with KSP for a long time at this point. How did you hear about it in the first place?

SM: I found a thread on the SomethingAwful forums, it was early days (0.8 I think) and I downloaded it almost straight away and started building rockets. There wasn’t much in the way of information back then it
wasn’t even clear if they’d actually simulated a spherical planet or proper orbital mechanics.

KG: And you wanted to show people it was possible?

SM: There was a lot of misinformation in the early days, and I largely set out to bring my astrodynamics experience to the players, I mean just showing that it was possible to orbit the planet was a big step up, especially when you consider the lack of information and instrumentation available at the time. I made a few videos showing simple orbital mechanics, and quite a few videos of things just exploding.

KG: So to clarify, what is your scientific background?

SM: I originally come from Scotland and grew up in Ayrshire and then went to the University of Glasgow to study astronomy & physics. After getting a couple of degrees I moved to Armagh Observatory, Northern Ireland to do postgraduate research. As it happens I got interested in the asteroid hazard and spent a lot of time coding up simulations of the solar system. As time went on I realised I was a better coder than I was astronomer and when I found myself on the receiving end of a tech job offer in San Francisco I relocated there, where I’ve lived ever since.
KG: A lot of people – myself included – would have struggled to get anywhere in KSP without videos like yours. Was there a lot of trial and error for you in the early days? Or did your background give you a decent leg up?
SM: Oh absolutely, my specific education and experience in orbital mechanics gave me a toolbox full of tricks that could be applied straight into the game. The experimentation most came from the rocket design and the eternal question of whether my rocket would actually fly or break apart under the stress.

[yframe url=’http://www.youtube.com/watch?v=tgPr4q5tj-Q’] While made with older versions of the game, Scott’s basic tutorials are still one of the quickest way to get to grips with KSP

KG: I suppose it’s a great compliment to the accuracy of Squad’s game that you were able to apply your real world knowledge of physics to the game and it actually work. How accurate is the game in relation to real world space travel and can I use Kerbal terms to make myself seem smarter in general conversation?

SM: The single body approximation that KSP uses is inaccurate, but, it’s almost exactly the model that NASA used in the 1960’s when landing on the Moon. But KSP makes a lot of decisions for gameplay reasons. For example, the engines are way heavier than real rocket engines, and the ISP scaling behaviour with atmosphere is completely wrong. Also, docking in the real world has to be perfomed far more carefully, because engine exhausts can damage the target. So I’d say it gives you just enough info to get yourself into trouble.

KG: Despite those inaccuracies, it does feel like KSP has a lot of potential for learning about the scale of space and some of the mechanics of what’s involved in rocket based space travel. Has someone like yourself, with an education in that sort of thing learned anything of note?

SM: Well, KSP has let me get hands on with orbital mechanics and what it taught me was that flying these orbit/rendezvous/docking manoeuvres is perfectly within the capabilities of a human pilot. Prior to KSP I thought that doing most of that stuff manually was the stuff of superhuman pilots, but, it’s quite easy once you get used to it.

KG: I know what you mean – there are certainly things about the game that get a lot easier with practice. How long have you spent playing KSP at this point, if you include video recording and your own playtime off camera?

SM: Probably a couple of thousand hours, although, to be far much of that is letting engines burn and holding a direction vector while doing other things; I’m pretty good at this multitasking thing these days.

KG: You don’t seem to be showing any signs of stopping either. You’re currently releasing pretty regular updates for your Interstellar Quest series. How much further do you plan to take it and do you have plans for any others in the future?

SM: I’m trying to keep doing new things, hopefully to get to the point where I can fly my team to another star system. I’m trying to throw a bit of a narrative in there, but in the last few episodes it’s been overshadowed by cool toys.

[yframe url=’http://www.youtube.com/watch?v=dJ2yqga7IrI’] You’d be surprised how many people – video uploaders included – that get this wrong

KG: Back when you did your Reddit AMA almost a year ago, you mentioned you were at around 10,000 Youtube subscribers, today you’re at over 200,000. Is this mostly down to your KSP videos?

SM: KSP is the biggest driver, but I have a solid presence in Eve & Star Citizen. I’ve very conscious of the need to diversify my content to give the channel beyond Kerbal, but that’s sometimes scary to post something you really believe in but nobody wants to watch (Strike Suit Zero and Starflight are 2 games I played through because I loved them, but viewer figures were much lower).
KG: Due to the popularity of your videos, I’ve seen it mentioned a few times that people would like to see them implemented into the game as tutorials, or that Squad should hire you to make new ones. Have you heard anything from the developers with regards to that?SM: Really, I don’t think that video tutorials make sense within the game. I think the existing tutorials just need to be expanded, allowing the player to interact is a far better method of teaching. 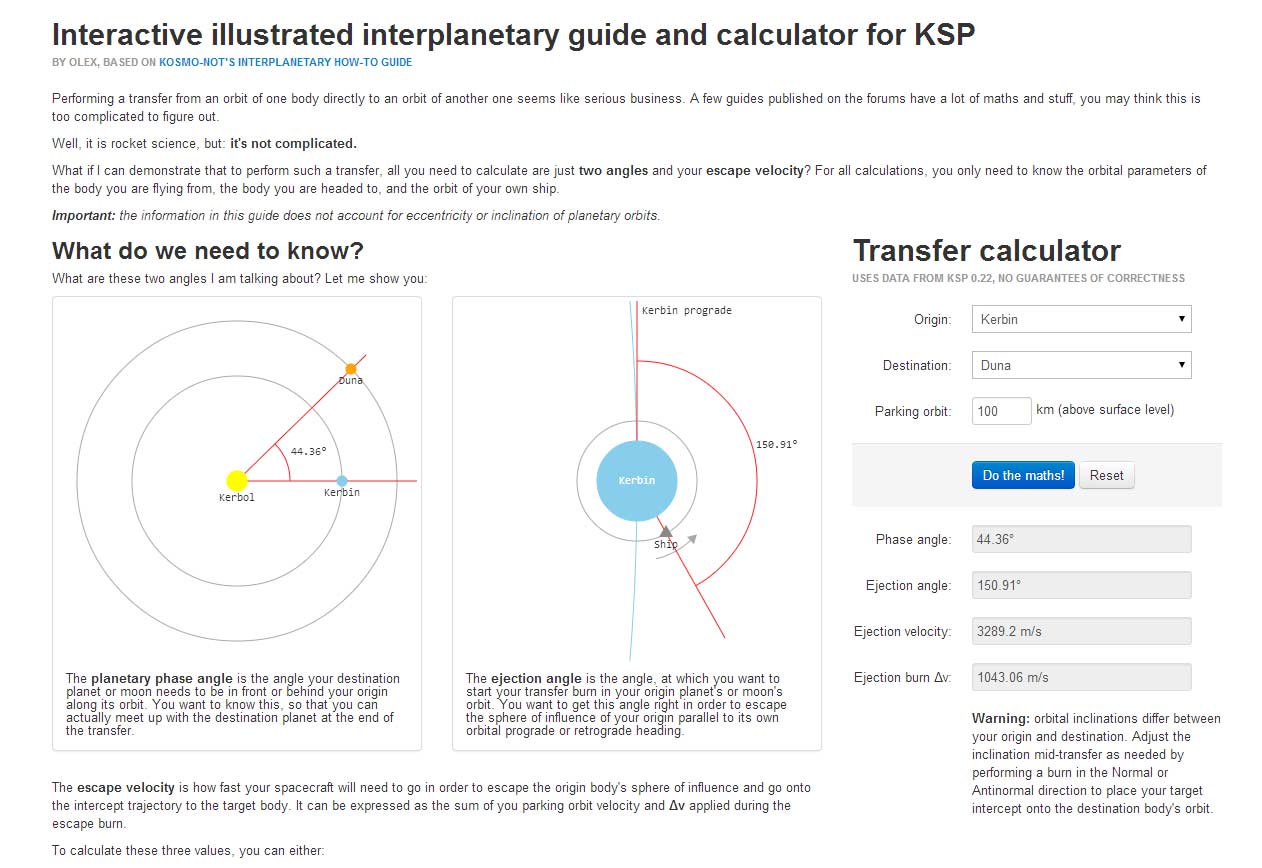 If you want to visit other planets in KSP, get ready to use this or break out the protractorKG: Of course some people get tired of the endless, “what do you want to see in v 0.XX” threads popping up on every forum, but it seems like the Manley wish-list might be a bit more pertinent than Joe-gamer. What would you like to see in the next patch?

SM: I’d really like to see the joystick settings ui fixed so that I don’t need to go to the main menu if I want to switch between a joystick setup for an aircraft and a spacecraft. But really the development cycle is running just fine, there’s a couple of mods I think need added to the main tree – Life Support, Texture Compressor, Joint Reinforcement, Clouds, Modular fuels, deadly re-entry and of course Ferram Aerospace improved aerodynamics.

KG: Thanks for your time Scott, we really appreciate it. Good luck with your space faring adventures.

Kitguru Says: I can’t imagine I’m the only KG reader who has to lay some of the credit for our ability to land on foreign bodies at the feet of Mr Manley. How’s everyone been getting on with the new career mode?