Mining the depths of the Oculus Rift forums

Whenever talk of the Oculus Rift comes up, you often hear about people converting already popular games over to it, like Mirror’s Edge, or Skyrim or one of the F1 racing titles. Either that, or one of the very popular, rollercoaster demos that hit earlier this year. What I’ve found very exciting with my own experiences of the Rift so far though, is by digging through the official developer forums and trying out many of the prototypes and VRJam contestants that haven’t had the publicity they deserve, you can find some very unique and truly breathtaking experiences.

Get ready for awesome

While the videos below don’t even remotely do the games justice, they’re the best that I can offer without simply lending you my Rift, which there’s no way in hell I’m doing.

With that in mind, here’s a few of my favourites so far:

Sharks are the least of your worries

This was one of my favourites, simply because of the atmosphere it managed to create with so little. You’re stranded on a row boat in the middle of a lifelike ocean, surrounding by the debris from presumably the wreckage of whatever ship you were on originally. Your task is to survive the days and nights without being drowned by the unruly ocean, by being eaten by the sharks that swim just beneath the surface or from starvation/thirst. Unfortunately very few of those dangers or elements are actually in the game at the moment (including any sound) and all you can really do is swim beneath the water and explore and try and make it back to the boat.

I spent a while exploring the ocean floor, avoiding sharks and investigating debris and plant life, but suddenly it all started to go dark. I looked up and through the murky water saw the silhouettes of the predators around me fade into the darkness. I needed to make it back to the boat so I swam up, as fast as I could. Finally my head broke the surface, but a wave crashed over me sending me back a few metres below the surface. It took several attempts to finally stay afloat and when I finally made it, I couldn’t see the boat; the waves were too talll. I was alone.

Space is big and is filled with big things

Titans of Space is an example of the learning potential of the Rift and its future offspring. In this ‘game’ you’re sat in a hover chair that zips around the solar system like an episode of Carl Sagan’s Cosmos, investigating the planets and learning about them and their moons. It’s all text based, which if it wasn’t for the generous sizing would be hard to read on the Rift, but there’s no problems here. There’s atmospheric music and some beautiful graphical effects in places.

Staring at the Earth early on in the tour, in wonder at its size and beautifully rendered clouds (it’s not even close to HD thanks to the Rift’s limitations, but the immersion makes up for that) and suddenly realising that the fraction of glowing yellow in my field of view, was the sun. When I tilted my head to try and look at it and found myself scanning from the floor to the ceiling to find its edges, I sat slack jawed at the sheer scale of it. I know the sun is really, really big, but it’s very hard to appreciate that with numbers alone. Here, I was floored, as I finally understood.

In space, no one can hear your jaw drop

There are 3D music videos for the Rift, but most of them have you looking at a giant, virtual 3D display. With Blue Marble, you’re in it. You’re in Earth’s orbit, flying around the planet and being shepherded to some of the most visually stunning locations, dodging asteroids and space craft automatically, while relaxing as awe inspiring music plays. You can load your own tracks in for a nice personal touch too.

This one’s a toss up between equally impressive moments. First, when I skimmed past the moon, watching the sun’s light fade as the Earth began to cover it and I saw an asteroid briefly light up our planet as it blazed towards the surface and burnt itself out. That and looking towards the North Pole and seeing the aurora borealis dance across the atmosphere.

Brace your legs and spread your wings

Epic Dragon sees you riding atop a giant winged beast, flying around rocky columns and formations as you collect sacred eggs to stave off the coming of the Dark Ones. It’s a very simple mini-game that if on anything else but the Oculus Rift wouldn’t be found outside of a Diddy Kong Racing multiplayer mode, but here it’s something special. Aesthetically it’s one of the better looking Rift demos, with some nice texturing, atmospheric fog and some lovely lighting effects as the sun goes down.

When I first flew as high as the game allows and dropped to the ground like a stone before swooping back up at the last second like a god damn badass and I realised I had my arms out and my legs braced as if I, Jon, was actually controlling the dragon with my body instead of just pointing my head. I don’t care if you’ve tried the Riftcoaster demos that are out there, you haven’t experience Rift speed until you’ve tried this. The sensation as the camera shakes and the way it bleeds off as you aim yourself back upwards is like nothing I’ve ever played before. It’s simply stunning.

KitGuru Says: And that’s just a handful of the interesting demos and experiences currently being made by the indie developers over on the Oculus Rift forums. If you guys enjoyed this post, let us know on the Facebook page and I’ll endeavour to unearth some more demos to bring to your attention.

As a side note, the Rift in general is absolutely mind blowing, despite the low saturation and ropey resolution. If you can, wait for the consumer or HD dev kit versions, but you have to at least try this the next chance you get. It will literally change the way you look at games. I’m not exaggerating even a little bit. 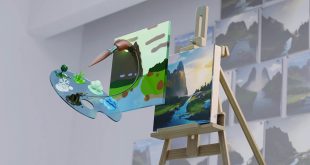 Nvidia has just launched the public beta of Canvas, an app that turns sketches into …