The Monster Hunter series is like a light-hearted Dark Souls. It features huge enemies to face off against, in long, drawn out battles of attrition where you fight to see which goes down first, the monster’s (invisible) health bar, or your number of health potions. Beyond pointing you at the next big baddy, it doesn’t give you much help either. Because of the slightly silly side to it though, it features some pretty out there weapons, including swords that would make Final Fantasy characters envious, lances that are also guns and hunting horns, giant didgeridoos which you can hit the enemy with and buff your team.

The latest design of that latter class of weapons to come out of the community, is even more ridiculous than normal.

Designed specifically for Monster Hunter 4 Ultimate on the 3DS, this new weapon is called “The Emperor’s Speech,” and it’s not so much a hunting horn as it is a throne for a poogie. Or a pig, if you’re anywhere else but in this game. As you play the horn, the poogie on top will oink away happily, reminding teammates of their pal back at camp and buffing them to fight all the harder. 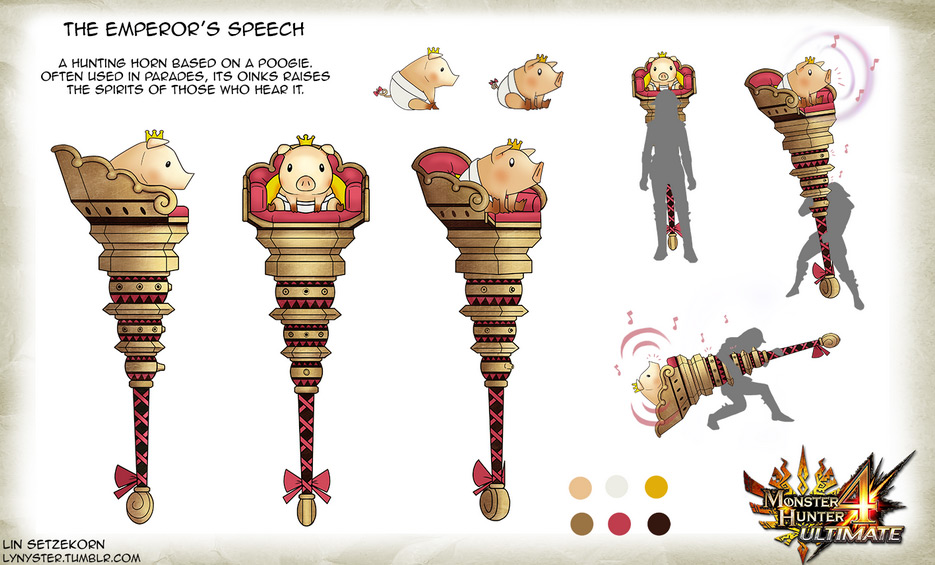 While he looks like he’s having a great time up there, I’m not sure I feel comfortable hitting a dragon with a pig

Monster Hunter 4 Ultimate is coming to the 3DS in Japan this Autumn, and early 2015 everywhere else.

KitGuru Says: If this showed up in Tri-Ultimate I’d probably give it a try, but I think I’ll stick to my Great Sword for now.