Something that I'm not sure even the clever developers at Valve saw coming, is the recent explosion of in-game item buying, selling and trading in some of the world's most popular multiplayer titles. It's created entire careers for some people and even for those that don't take it so seriously, it's a great way to get that particular item you want without jumping through all the hoops. But what if it was a little simpler and safer? That's what SwapGaming wants to make possible. 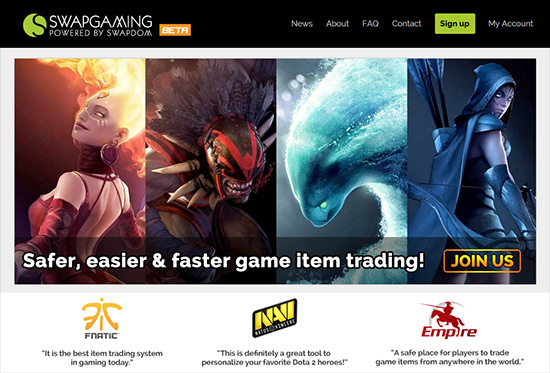 “SwapGaming is an in-game item trading system that is powered by Swapdom Inc. and links to your Valve's Steam account,” reads the company site. “There is no need to find each other online, no negotiation, and no checking of others’ reputations in order to make trades.”

SwapGaming does it all for you, acting as a middle man for items, holding them in escrow until a trade has been found. It also means that a trade can be completed automatically if someone who is offering what you want and also looking for what you're offering, is found.

This means that you don't get your item until they get there's and vice versa. There's no need to hash out a deal or haggle, it's a straight swap of what you want for what they want.

“Our goal with SwapGaming is to make item trading viable on a massive scale, to help millions of players get the items that they want by trading items they don't. We wanted to make trading fun, easier and safe.” said Robin Alter, CEO of Swapdom. “We have gotten great feedback from many gamers, which enabled us to create this revolutionary game-item-trading platform. Now it's up to the gamers of the world to test and use it.”

Currently the platform only supports Dota 2 and CS GO, but it seems likely that as it increases in popularity, other games will be added.

A spokesperson for the company told KitGuru that it was working closely with Valve to continue developing the system, but that it was only the first of SwapGaming's partners and more would come in the future.

KitGuru Says: Is this the sort of service you guys would use, or are you happy with the base system for item-trading?