Home / Software & Gaming / Wargames and Indies at Multiplay i51

Wargames and Indies at Multiplay i51

There's always a lot of hardware and AAA gaming on show at megaLANs like Multiplay's iSeries, but if you're in the mood for something a little different, visiting the indie zone is certainly worth your visit and there's even a wargaming booth giving you a chance to coo over awesome paint jobs and impressive scenery.

There's a lot of titles up for play in the indie-zone, too many for me to play today, but here's a few I did get a chance to sit down and try.

NB. The first two I tried got some coverage in my “What's on at i51″ piece, so check that out for their Greenlight links. 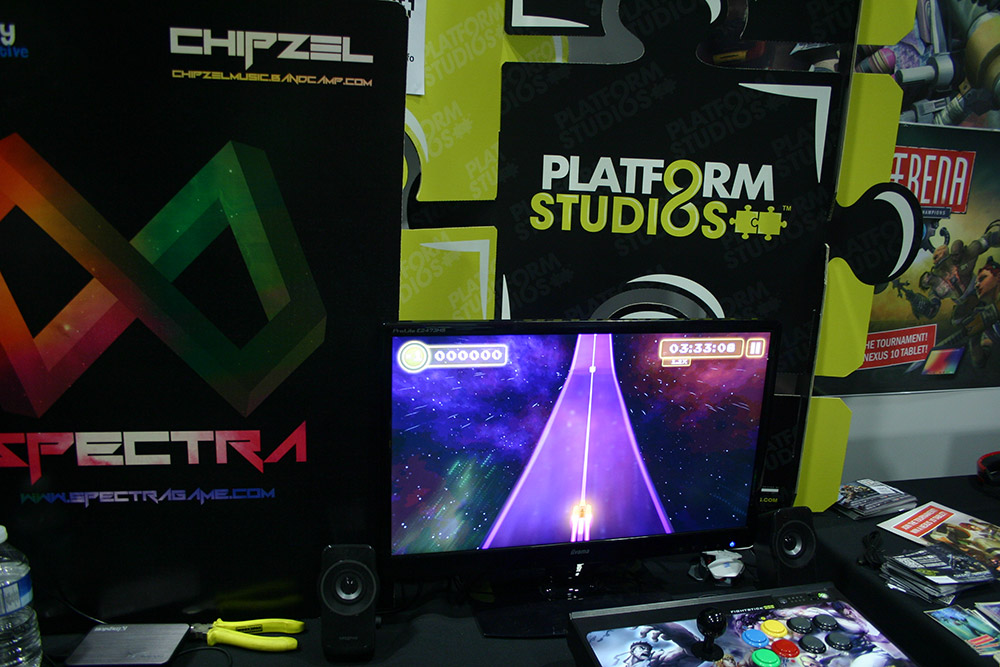 One of the simplest of the lot was called Spectra (its site appears to be down, but you can access a cached version here). If it reminds you of audiosurf, it should, because it works in a similar way, mapping out levels you “drive” through based on your song choice. However unlike Audiosurf where you load in your own tracks, this one is all based around the Chiptune tracks of Chipzel. You can hear the music from the game here. 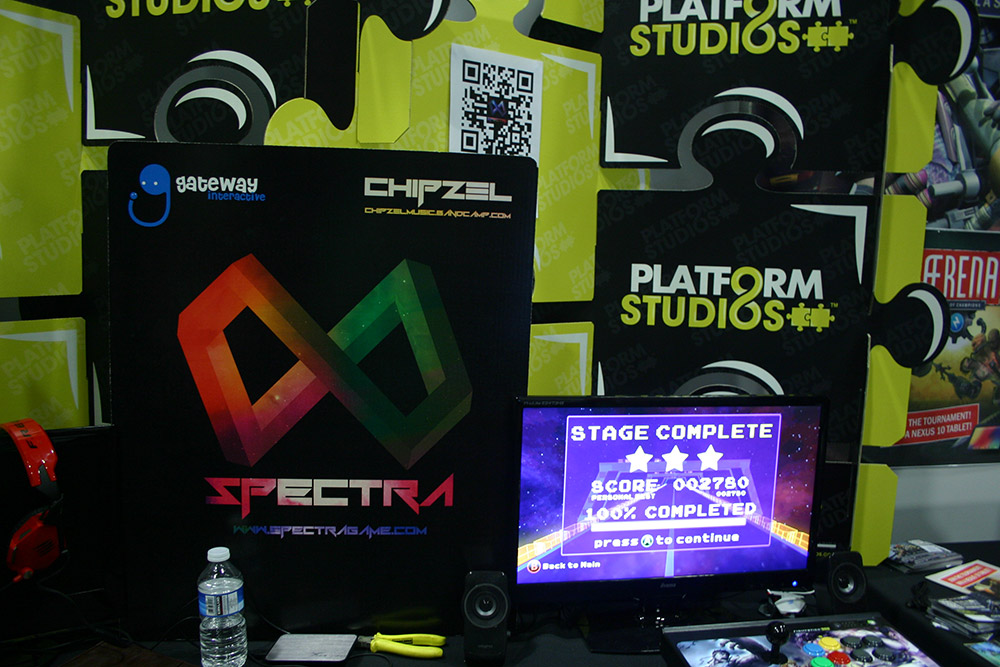 You'll be happy to know that I was the first one today to achieve 100 per cent completion on the 4th level. Granted my score was abysmal, but I finished it.

Spectra isn't the most deep of games, but it's a fun little aside and as with Audiosurf, a great way to experience music. 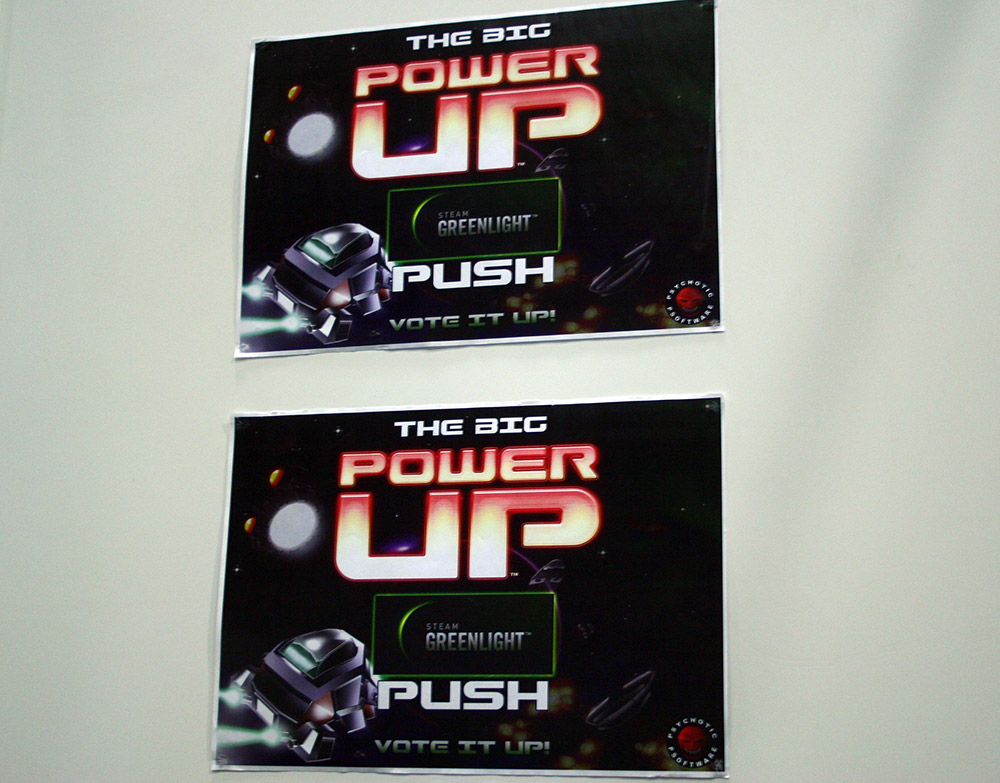 Power Up is a (Greenlight processing) side-scrolling shooter with a classic feel. The graphics aren't pixelated, but they are retro and it's perhaps more impressive because it's all done by one man. Creator Mike Hanson has handled the art, music and programming for the game, so he deserves some props for that alone. 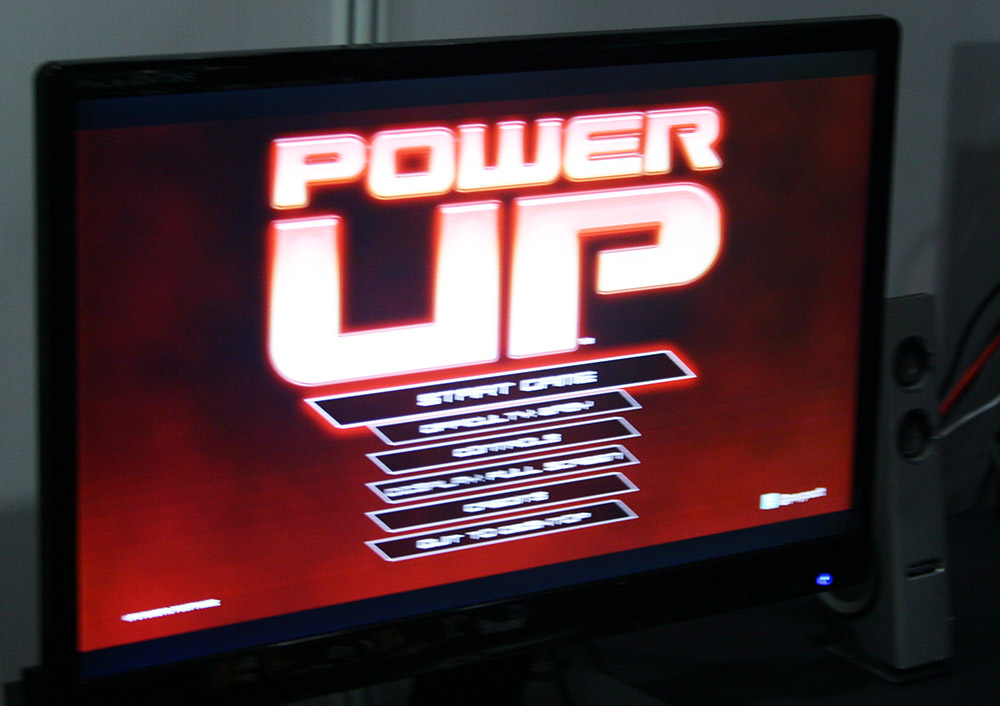 The game has been out on Xbox Live for some time and it's already available on Desura, Humble Store and the other usual places, but to get it on Steam he needs a few more votes, so help the fella' out if you like what you see. 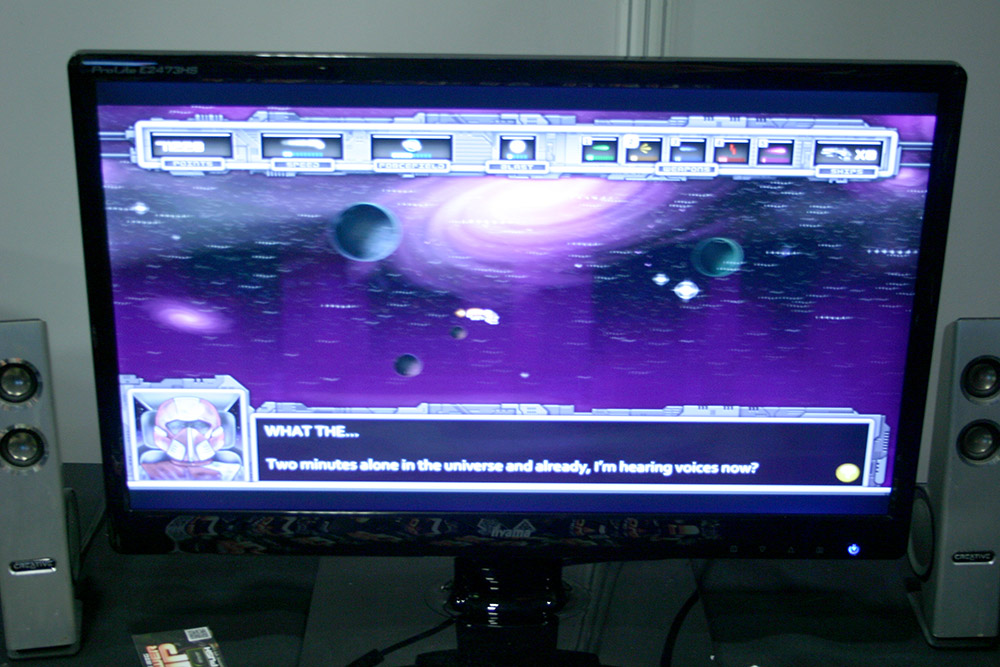 If you're a Minecraft fan, but feel like it could do with mixing Kerbal Space Program and Unreal Tournament into the mix, consider RoboCraft, a free to play, building, arena combat game. 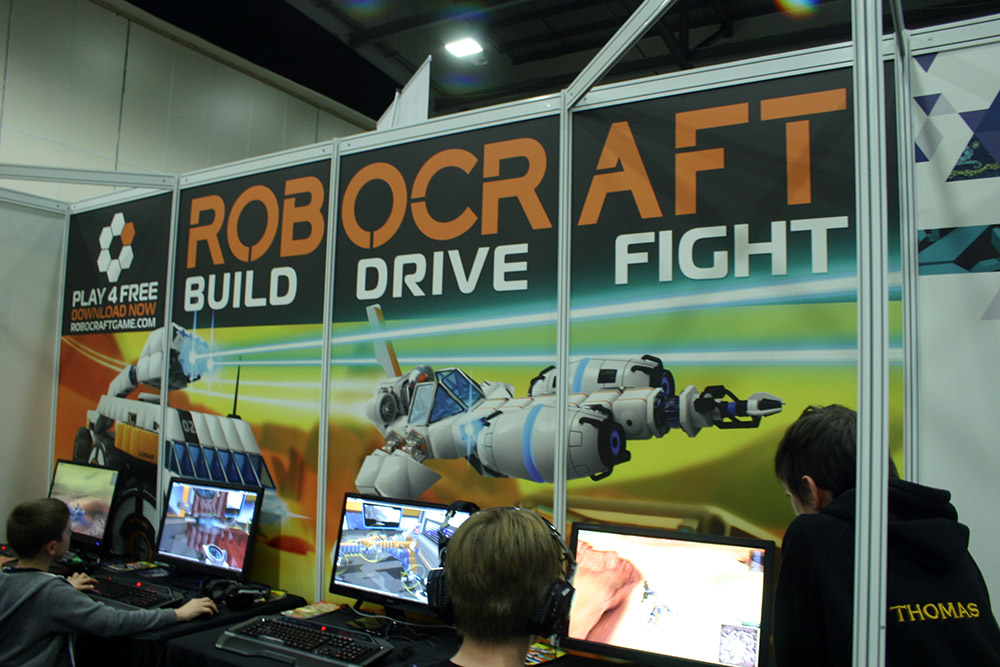 The game is split into two distinct phases, the builder module and the combat one. In the former, you use your in-game currency, real-money purchases (aesthetic only) and level-up unlocks, to create a vehicle of some kind. It can be a car, boat, plane, hovercraft, whatever you want – just bear in mind, the physics model is realistic, so if you place your engines too far forward on your jet, it'll do flips until it blows up. 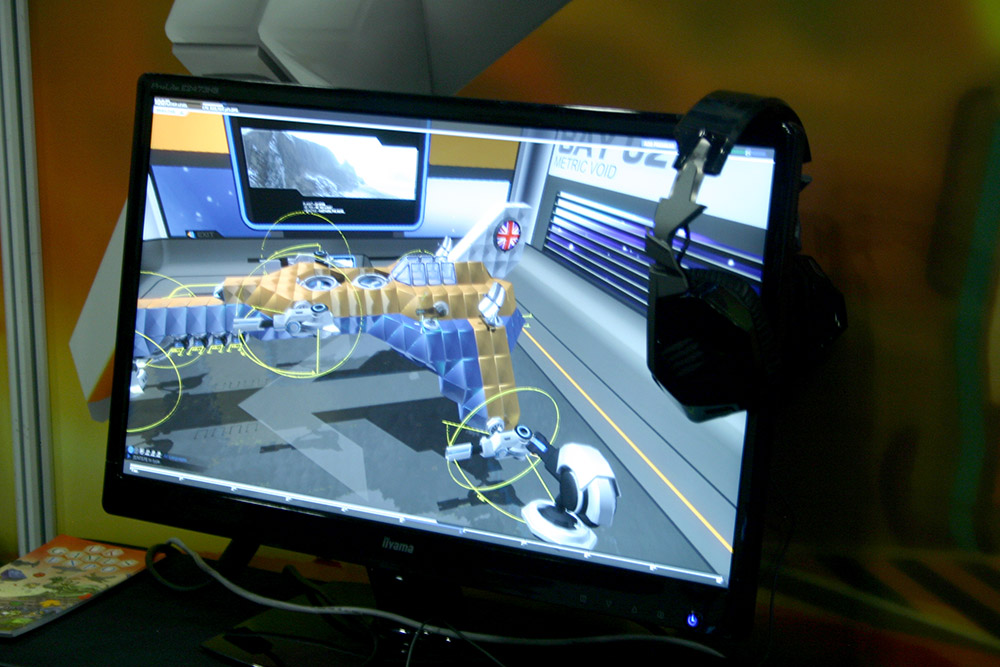 There's a number of different weapons you can attach, including lasers and railguns, with more being added soon. You'll probably want to diversify too, as Robocraft has competitive eSports play in mind. They expect teams to form, with their own custom vehicles and weapon set ups, to really show what the game can do. 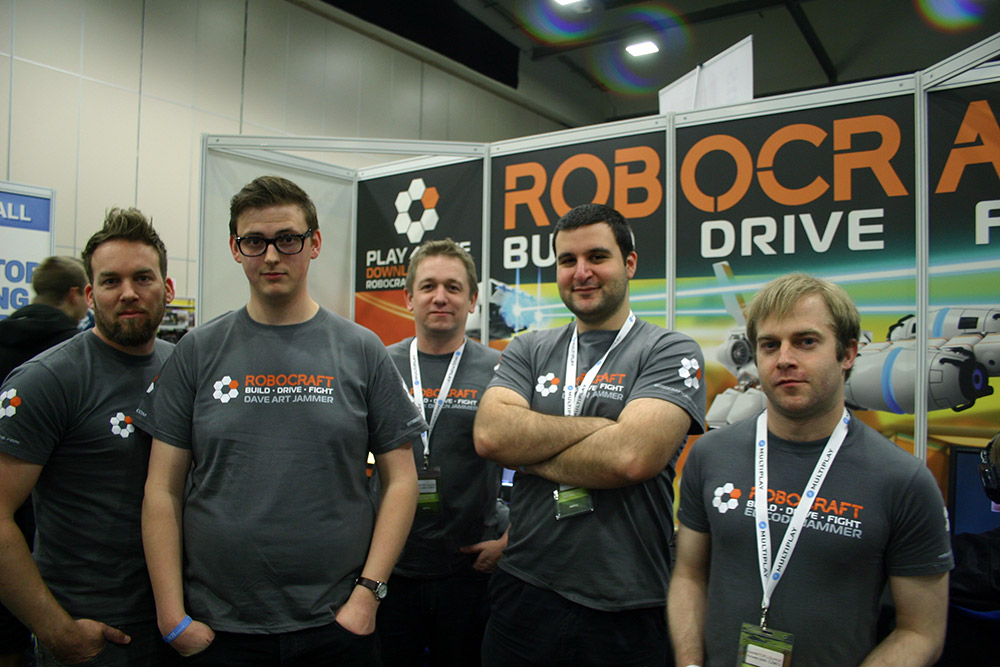 They're a pretty friendly bunch too, though the new Japanese community manager second from the right is the most talkative. He deserves some credit too, the man has only been part of the team three weeks and already he talks the best game out of all of them.

However, as good as Robocraft is, my favourite quick play of the day goes to Aerena, a current Steam and Google Play store, turn based strategy title set in an “Aether Punk” world. In Aerena, it's 1955, the World Wars were fought over Aether, not ideals and it's these processing towers that you now fight over and on. 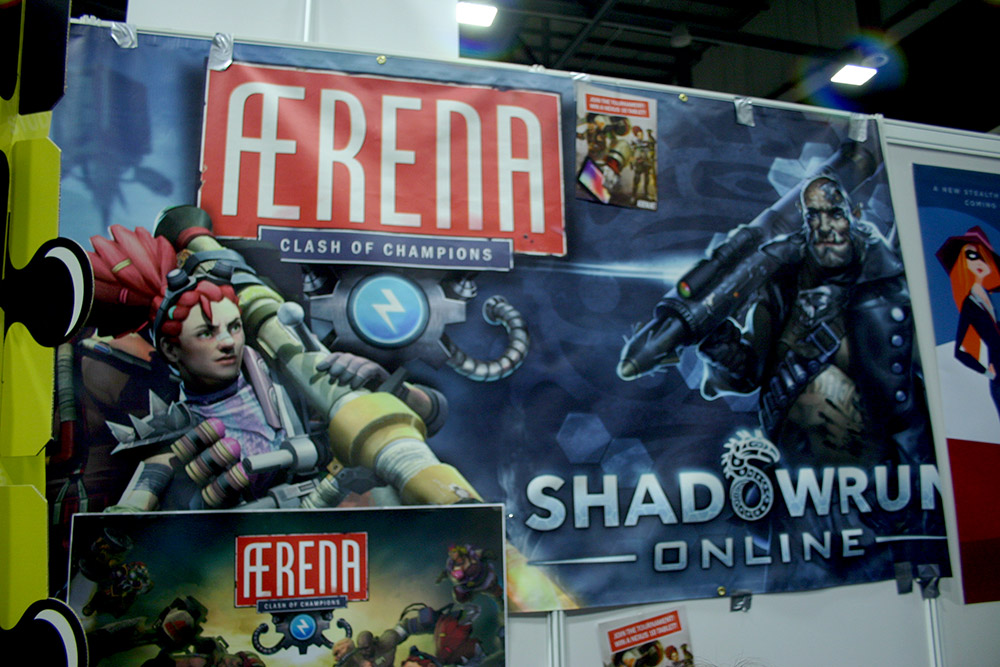 It features red-heads with bazookas, chainsaw gauntlets and mech-fist shoulder mounts like Skullgirls, along with a bunch of other characters and each of the ships you're trying to destroy have their own unique skills, weapons and captains. There's four in the game currently, with more set to be released as time goes on. 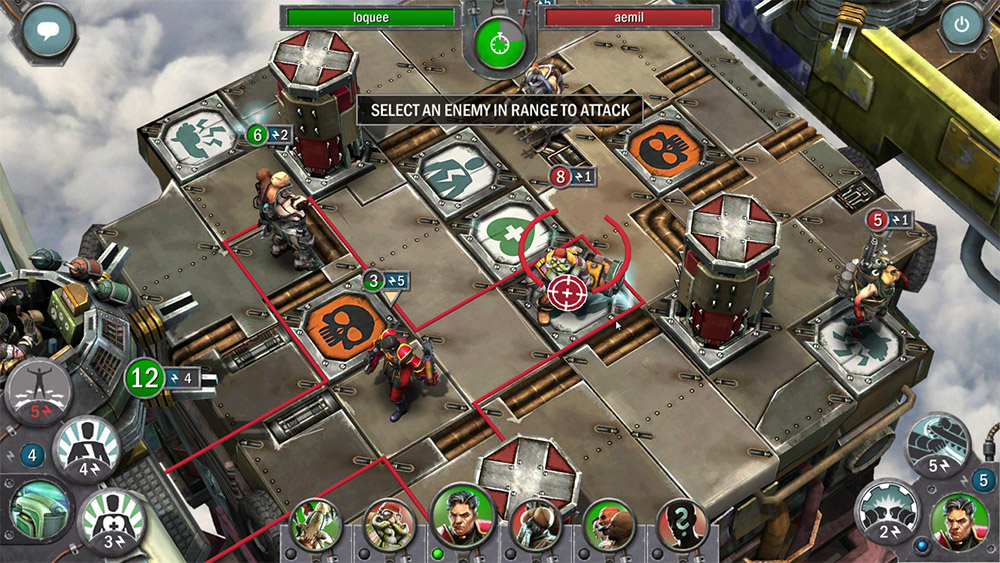 Even though I only did a couple of levels, the simplicity of it and the obvious potential for strategic depth definitely piqued my interest. If you're around tomorrow, consider stopping by, there's a tournament running for a Nexus tablet. 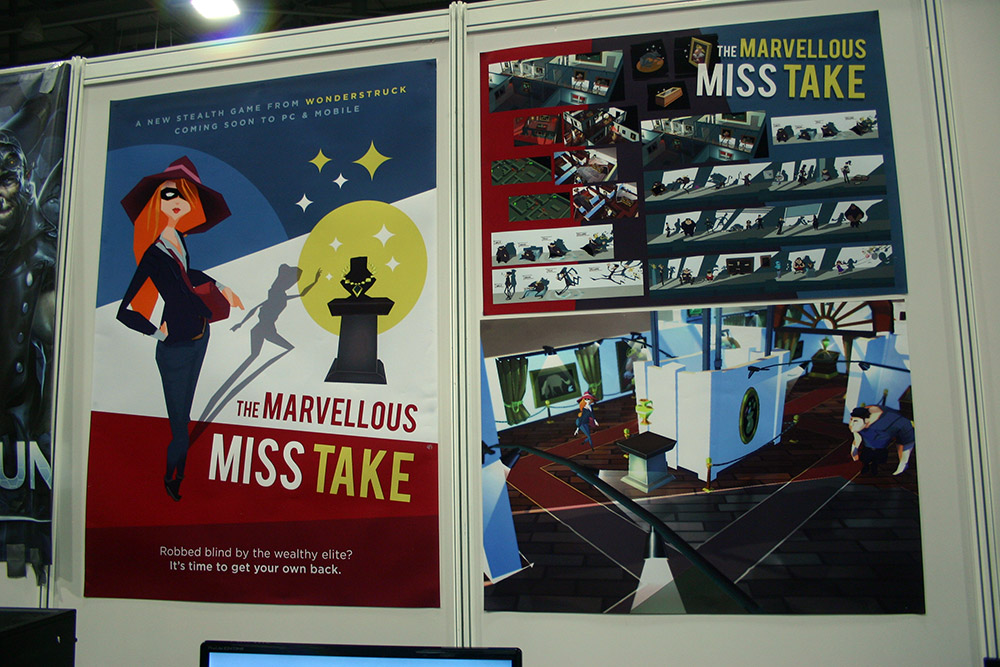 One game I didn't get a chance to play yet, but which had an eye-catching graphical style (reminding me of Evil Genius) was The Marvellous MissTake. It's an exceedingly non-violent theft game, which has you pinching priceless art and artefacts without alerting the hulking guards.

Previous Win a copy of TitanFall this weekend!
Next AMD plans to reveal new-gen ‘Beema’, ‘Mullins’ APUs this quarter