Home / Software & Gaming / Amazon may have given away the ending to Batman: Arkham Knight

Amazon may have given away the ending to Batman: Arkham Knight

Amazon may have accidentally given away the ending to Rocksteady's final chapter in the Arkham series. This week, Amazon launched its listing for the Batman: Arkham Knight limited edition, one of the pictures attached to the listing showed a quote engraved on the bottom of the collectible Batman statue.

Once word got out that Amazon may have spoiled the game's twist ending, the company was quick to remove the offending image so those of you that were fortunate enough to avoid it can continue to do so. If you want to be spoiled, then you can head over to VideoGamer, which has posted the spoiler filled quote. 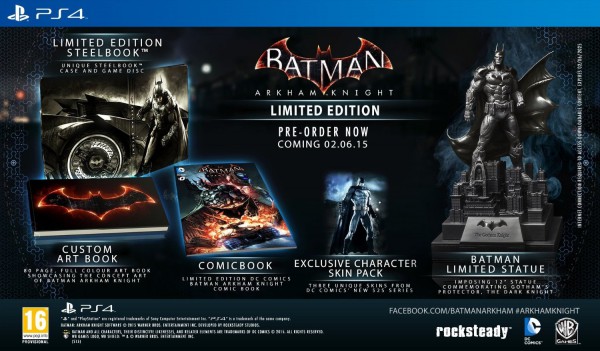 Amazon has the exclusive rights to sell the limited edition versions of Batman Arkham Knight for the Xbox One and PlayStation 4. The game will release on the 2nd of June, following a lengthy delay from October last year.

The limited edition version also contains a steel book case, an artbook, exclusive comic, a Batman statue and some new character skins- which have been featured in past games in the Arkham series.

KitGuru Says: I was unfortunate enough to see the image on Amazon before it was pulled. If you want to see the spoiler then it is easy enough to find, the trouble is now that the information is out there, it might be a little harder to avoid. Are any of you guys looking forward to Arkham Knight?