The announcement was made in a live-stream on YouTube today, showing off some pre-alpha footage of Jacob sneaking around and stabbing bad guys. Much like Unity, the game will not be showing up on the Xbox 360 or PlayStation 3, Sticking to current generation hardware only. 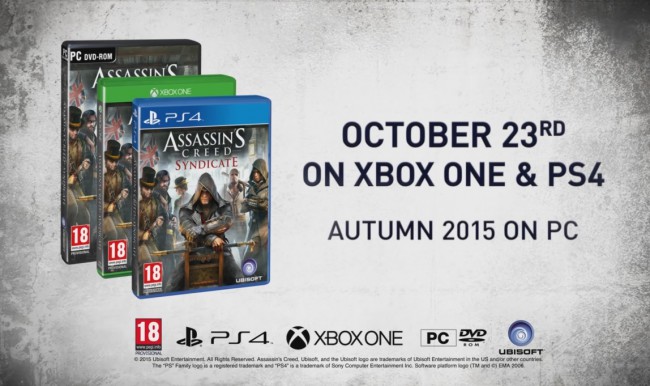 The game is set to release on the 23rd of October on the Xbox One and PlayStation 4. The PC on the other hand does not have a set release date, Ubisoft is likely planning to take more time with that one following everything that went wrong with Assassin's Creed: Unity, which still to this day, does not run very well.

The game is in development at Ubisoft Quebec, rather than Ubisoft Montreal, where the series is normally developed. The game is focusing on fast paced combat, with focus on hidden blades and brass knuckles for the new hand to hand combat system. This time around, the story seems to be focusing on growing tensions between the working and upper classes.

KitGuru Says: While Assassin's Creed: Syndicate does have a pretty cool setting and premise, it is going to take a lot for many players to trust Ubisoft again after the troubles we faced with Unity.