Just a week before Rocksteady’s finale to the Batman Arkham Series is set to release, Warner Bros has canned the game’s collector’s edition. The £150 version of the game contained a scale replica of the Batmobile featured in the game but unfortunately, nobody will be getting their hands on it, despite pre-orders opening up last year.

Warner Bros announced the cancellation in a forum post, blaming “unforseen circumstances” with production: “We regret to inform you that we are not able to release the Batmobile Collector’s Edition of Batman: Arkham Knight due to unforeseen circumstances that greatly compromised the quality of this extremely limited run of product”. 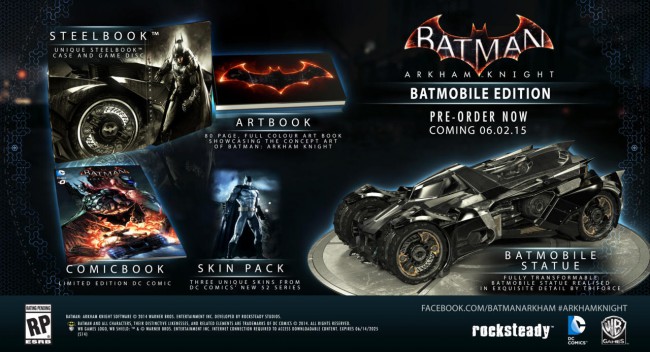 Refunds will be provided by retailers that accepted pre-order, although Warner Bros failed to let us know exactly why it took this long to let us know about the cancellation. The game is days away so a cancellation of one of the editions this late is very odd indeed.

That said, if there was a quality issue, it is probably for the best that the Batmobile edition not be sold. There is some good news though, the New 52 skin pack, which comes with new skins of Nightwing, Robin and of course, Batman, will be made free for everyone.

KitGuru Says: While a cancellation this late in the game was pretty unexpected, it isn’t unheard of. Heck, Watch Dogs was delayed by Ubisoft around two weeks ahead of its original release date so these things do happen. However, it wouldn’t hurt Warner Bros to be more upfront with their customers about issues instead of leaving everything to the last minute.

Previous These are the specs of BlackBerry’s rumoured Android device
Next Ubisoft claims PC version of Assassin’s Creed: Syndicate will be made properly