Digital Homicide, the studio perhaps most famous for releasing bad games and then trying to take legal action against those with negative feedback, recently had one of its two massive lawsuits dismissed. Last year, Digital Homicide’s James Romine filed a multi-million dollar lawsuit against game critic Jim Sterling but this week, Sterling has happily reported that he has finally managed to get the suit chucked out of court.

The judge in this instance dismissed the lawsuit with prejudice, which means Romine can’t just refile the same lawsuit. James Romine, one of the two developers behind Digital Homicide had hoped to win as much as $15 million from Sterling, suing for libel, slander and even assault. 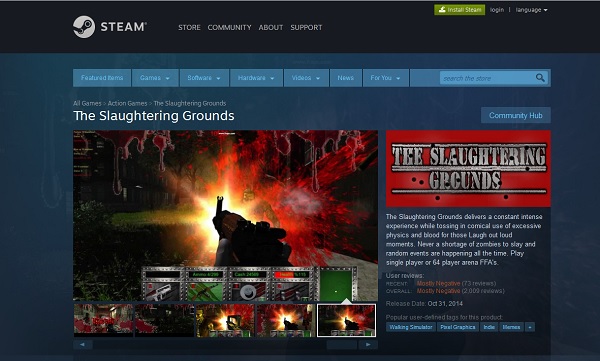 Writing on his website, The Jimquisition, Sterling wrote a lengthy statement going over the lawsuit’s dismissal, expressing is satisfaction in seeing the petty legal squabble buried: “After a year of lingering and a cavalcade of increasingly exasperating amendments, it is a distinct personal pleasure to finally be able to say that the lawsuit “James Romine v. James Stanton” has been dismissed with prejudice following discussions between my lawyer Bradley Hartman and the plaintiff James Romine.”

“I’m obviously pleased with the result. We filed for dismissal, because this whole thing was an instant waste of time and money that could never be recuperated. Even if this went to court and we counterclaimed, what would we get out of it? A dismissal with prejudice is even better than the simple dismissal I’d originally aimed for – this effectively means these ludicrous charges aren’t coming back.”

Romine had previously tried to crowdfund money to go up against Sterling in court but didn’t get enough to really cover the costs. Aside from that, Digital Homicide also successfully obtained a subpoena for the details of over 100 Steam customers in an effort to sue those writing negative comments on Digital Homicide’s Steam pages. This move got the studio booted off of Steam entirely, essentially ending Digital Homicide’s business for good.

KitGuru Says: It seems that Digital Homicide successfully shot itself in the foot by failing to take criticism on board and deal with it properly. Trying to sue customers and game critics certainly isn’t going to get you anywhere. Hopefully we won’t see many more indie studios try and silence critics with massive lawsuits.