While Discord may have started out as a chat app, it is becoming clear that it aims to be much more. Today, the folks behind Discord announced a new tool for developers, allowing them to integrate Discord with their games. With this tool, users will be able to set up parties, send out game invites and even invite others to spectate their game.

The new feature is known as ‘Rich Presence'. Discord already has the option to show people what game you are currently playing, but with this new feature, users will be able to see ‘game status' too. This means users will be able to see whether or not someone is in a joinable or private lobby. You will also be able to see if someone is in the middle of a match and how long it has left. Finally, you will also be able to choose whether or not to join a game or spectate via Discord. Xbox Live's friends list has similar functionality. 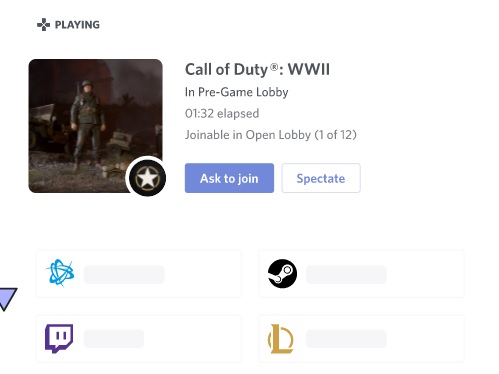 Currently, there are more than 15 developers looking to implement the ‘Rich Presence' feature with Discord. The list currently includes a lot of indie titles, but there are some larger additions, like Call of Duty: WWII, Payday 2 and even Divinity: Original Sin 2. Over time, we will likely see this list grow, particularly since Discord is currently the most popular gaming community app.

Interestingly, PUBG isn't on the list just yet, though the game has some integration with Discord through a ‘trusted server' list, allowing developers and players to team up through official Discord channels. It hasn't been confirmed yet, but I would be surprised if PUBG didn't also adopt Rich Presence at some point.

KitGuru Says: Discord has been growing rapidly over the last year, and it seems to have caught the attention of publishers. With this new feature, it should be easier to group up with others and find games to watch/join. Do many of you use Discord on a regular basis? What do you think of the latest feature?

Previous Nearly 2,500 websites are cryptojacking, draining your processor
Next Star Wars Battlefront 2 trial does nothing to quell pay-to-win concerns