Star Wars Battlefront 2 became embroiled with a controversy around its not-so-subtle pay-to-win microtransactions during its Beta phase, prompting EA and DICE to change things up ahead of release. A 10-hour trial for the title is now available on EA Access and Origin Access for Xbox One and PC respectively, showcasing just how much has changed.

Battlefront 2 houses a premium currency which it dubs ‘Crystals’ which are used to buy loot crates in-game. Leading up to its November 17th release, prices are cut by 10 percent, however the standard pricing is as follows:

At face value, that already seems quite expensive, however YouTuber XfactorGaming goes into more detail as he proceeds to buy 120,000 Crystals to see just how pay-to-win Battlefront 2 is in comparison to its Beta. 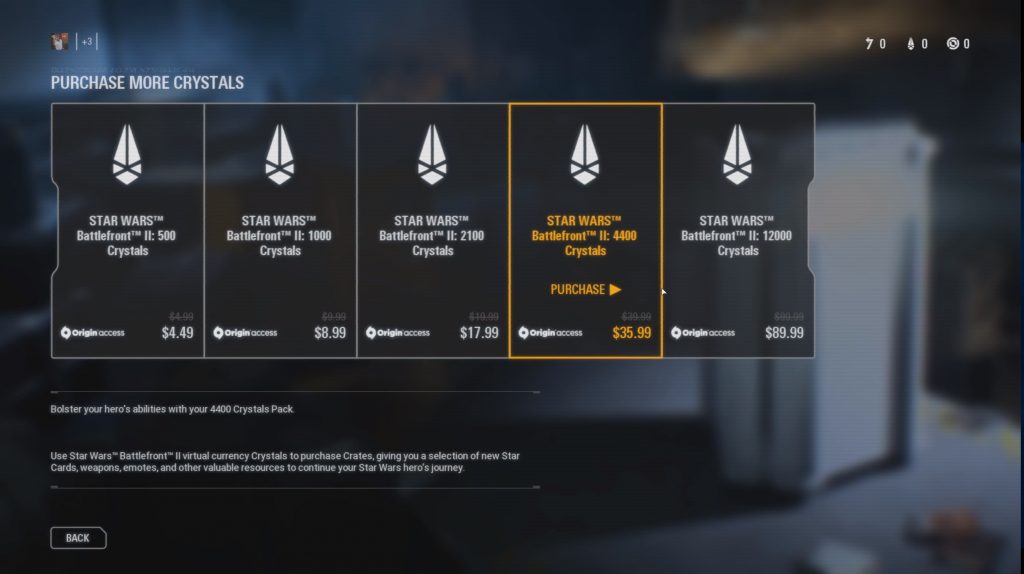 First thing to note is that DICE has since removed the highest-tier purple Star Cards from the loot crate system entirely, and they are now only able to be crafted once the player has reached rank 20 overall and specific ranks within classes. Green-tier cards can be crafted at rank 10 and blue at rank 15, however these can be earned directly within loot crates.

XfactorGaming opened around 85 loot crates, gaining a neat 7 blue-tier Star Cards, a whopping 48 green-tier Star Cards and “countless” grey-tier cards that are available from the get go. Alongside this, he acquired 3,915 crafting parts and 18,700 Credits which could fund straight back into more crates.

Crafting parts come in handy as it costs 40 for grey-tier, 80 for green-tier, 120 for blue-tier and approximately 400 for the highest purple-tier, although this can vary. While the latter three are locked behind level gates, amassing so many crafting points means that the moment those levels are hit, the player can gain a distinct advantage over others.

The worst kind of advantage, however, comes in the blue and green-tier cards that were unlocked at starting level, giving players rank 10 and 15 perks way before their time. XfactorGaming in fact managed to unlock a level 14 interceptor for Battlefront 2’s Starfighter Assault mode, allowing him to steamroll competition.

“We’re absolutely mopping people up,” says XfactorGaming. “When you’re rolling around with a level 14 interceptor and it takes people 150 percent more time to lock on because you’ve already got a blue three-point card, that’s an absolute game-changer.”

EA and DICE are continuously listening to fan feedback, but it doesn’t look like the changes that have been made have been all that effective at quelling pay-to-win concerns. So long as players have the cash to flash, they could be decked out with greens and perhaps even blues right from the start.

KitGuru Says: While it’s worth factoring in that the games industry has changed since 2005, it becomes even sadder that we have Pandemic’s renown title to compare it to on what the game should be like. Here’s hoping that more changes are on the way. Do you plan on picking up Star Wars Battlefront 2?