Star Wars Battlefront is a few months away but there is still quite a bit we don't know about the game. However, DICE and EA do keep dropping bits of knowledge here and there. Today the duo announced Blast Mode, a new multiplayer game mode for the upcoming Battlefront game.

Essentially it's just a classic team deathmatch game mode, pitting two teams of ten players against each other. The first team to reach 100 kills, or is ahead at the end of the ten minute round, is declared the winner. The game mode will come with some pretty nice maps as well, according to lead level designer, Dennis Brännvall. 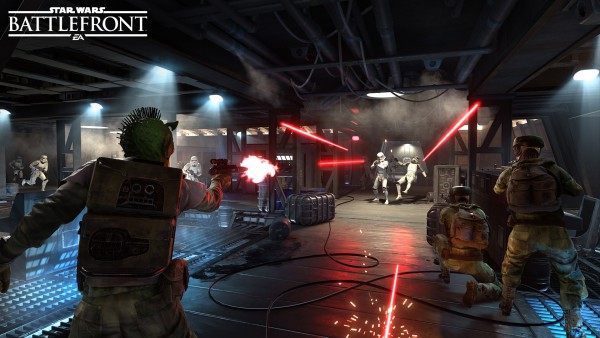 “One battle you’ll be fighting within interior levels on Endor or Sullust. In the next battle, you might find yourselves among Tatooine’s dusty canyons, or inside the undeniably cool Ice Caves on Hoth. My favorite is the verticality of Tatooine, fighting by the Sandcrawler”, he said.

Blast mode is designed to be fairly close quarters, so the maps aren't as big as they are in other game modes. These maps aren't just smaller, sectioned off versions of the larger maps though, there will be differences in map design between those set in similar locations.

KitGuru Says: Given that Star Wars Battlefront is going to be a multiplayer shooter, I think a team deathmatch mode was likely assumed to be in the game by many. However, it will be nice to see if DICE can bring anything new to the table to change things up a bit.