Elite: Dangerous is coming to Xbox One but won’t feature cross-play

Elite: Dangerous is making its console debut on the Xbox One but despite Microsoft’s recent attempts to unify PC and Xbox gaming, the space sim won’t be featuring cross-play. However, there is a pretty good reason for it that many PC gamers will actually appreciate.

There are a few planned games launching on the PC this year, which will feature cross-platform multiplayer with the Xbox One. Elite: Dangerous won’t be following down this path, not because of any technical limitations but rather because of patches. 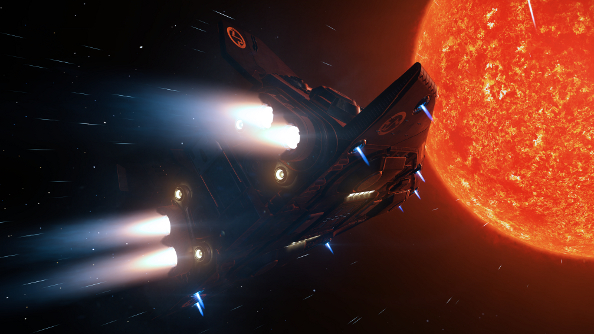 According to David Braben who spoke with PCGamesN, Frontier Studios does not want to hold back the PC version of the game due to the console patch certification process, which can delay updates and means they can’t be pushed out as fast on console as on PC.

Despite the lack of cross-platform play, both console and PC gamers will be playing the same simulation: “What we’ve said for definite is that they will be playing in the same world. The same background sim will be effecting the same stock markets and stuff like that. I would like to see cross-play as well. There’s nothing presenting it technically, other than that the worlds might be slightly out of sync.”

KitGuru Says: Frontier making the decision to opt out of cross-platform play in order to continue to provide timely updates to the PC version of the game seems like a fair trade-off. There won’t be a ton of PC simulator gamers out there that will be affected by a lack of cross-platform gameplay.