Steam has gone through various changes over the years, the version we have today is quite different from what we had back in 2005 for instance. However, it looks like we may see another major update to Steam’s user interface in 2017, as this evening a new image appeared on the Steam database showing off a complete overhaul to the Steam client.

A new image of what looks like a new version of the Steam client is one of the more radical changes we’ve seen to Steam’s UI. For starters, there are more tabs at the top, Store, Games and Community are all still there but Comics, TV, Movies, Music and Apps have also been added to the top row. Apps will likely be where you can find all of your Steam software installs, such as benchmarks or tools. We already know Steam sells movies from time to time but this image suggests it will jump into TV shows too. 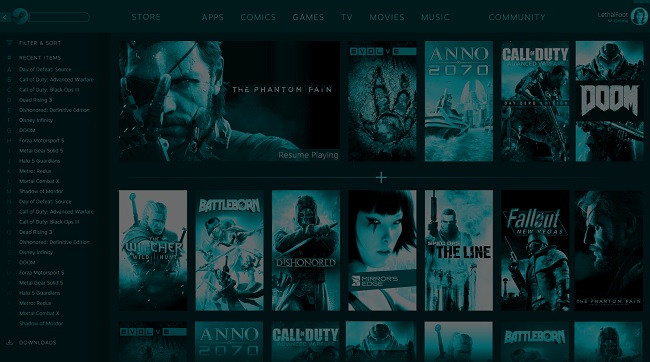 Unfortunately, the image is transparent, so it isn’t the best quality. Still, you can get a rough idea of what the new client is supposed to look like. The new library has the usual list of purchased games on the side but rather than leaving empty space to the right, the area is now filled with game posters, fusing the classic library look with a tweaked version of Steam’s Grid View.

The music section will likely just be an area for you to scroll through your imported music library. Essentially, Steam is looking to transform from a games client to a full blown media centre.

We currently don’t have much of an idea when this version of Steam will ship or even if it will. However, this image was discovered on SteamDatabase through the latest client beta, so it’s quite recent. It also comes with the file name ‘SteamU’, so take from that what you will.

KitGuru Says: Steam hasn’t had much of a UI change in the last few years, so this looks like a breath of fresh air. While the image above isn’t the best representation due to its transparency, it does give a clear enough look at what Valve is going for. I quite like the changes myself, what do you guys think?