Microsoft Flight Simulator made a grand return to the spotlight earlier this year thanks to an impressive reveal at E3. Now, it won’t be long for the first enthusiasts to get their hands on it, as the Flight Simulator Insider Program has been taking sign-ups and is now ready to kick off. The developers have also released a roadmap to detail the updates ahead.

The Flight Simulator Insider Program is now live. Currently, testing is being kept internal but Insiders should get their hands on an alpha build soon. We can expect some frequent updates too, with the developers currently aiming for around three media updates per month from August through October. 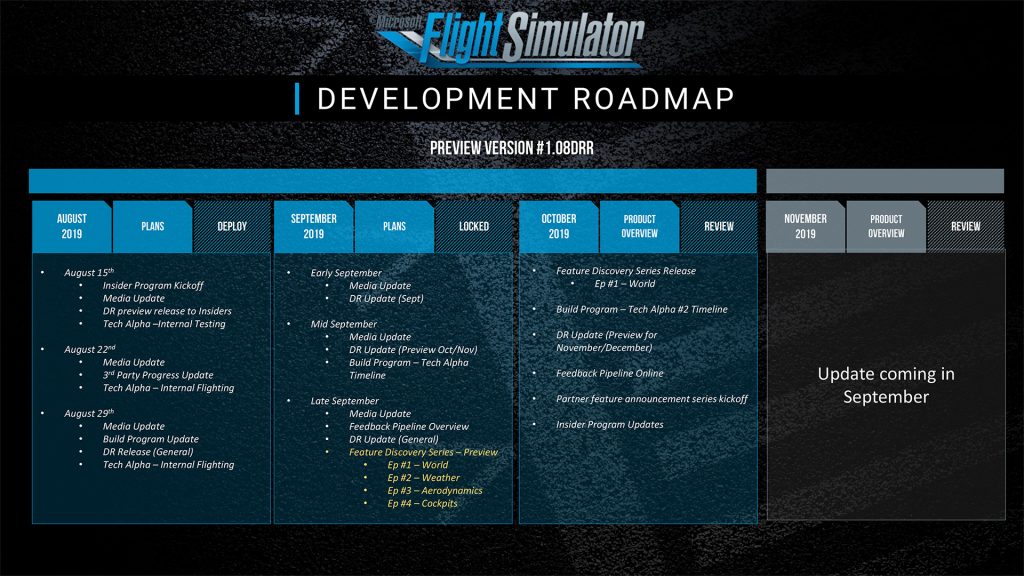 The above image shows the roadmap in its current form. In September, we’ll get another update to this, which will reflect changes and add development goals for November. Then, we’ll get a preview of what to expect for December 2019 in October.

Video diaries are also being planned, which will show off parts of the game in more detail, beyond what we already saw in the trailer. The first episode is scheduled for early October and will focus on the world, with future episodes focusing on weather, aerodynamics and cockpits.

We still don’t have a release date for Flight Simulator but by the looks of it, Microsoft is going to be quite open as development continues, with plenty of Insider testing to collect feedback and make changes along the way.

KitGuru Says: Microsoft Flight Simulator was one of the most surprising first-party announcements at E3 this year. It is nice to see it making a comeback, although it’ll be a while before development wraps up. Are any of you signed up to the Insider program for this? Or will you be waiting for it to come out in full?