Minecraft is getting premium currency microtransations and paid mods

Since buying Minecraft for $2.5 billion, Microsoft has been mulling over ways to continue making money. Core game sales are still impressively high, with Minecraft averaging 53,000 sales per day over the course of 2016. However, There are a lot of people who already own the game, and Microsoft isn't making money off of those people, so soon Minecraft will be getting ‘premium currency' microtransactions, which can be used to buy add-ons.

In Minecraft's upcoming Discovery Update, the game will receive its own marketplace, in which players can buy texture packs, skins or adventure maps on the Windows 10 and mobile versions of the game. These things will all be buyable using ‘Minecraft Coins', which come in currency packs sold for real money, like in most free to play mobile games. 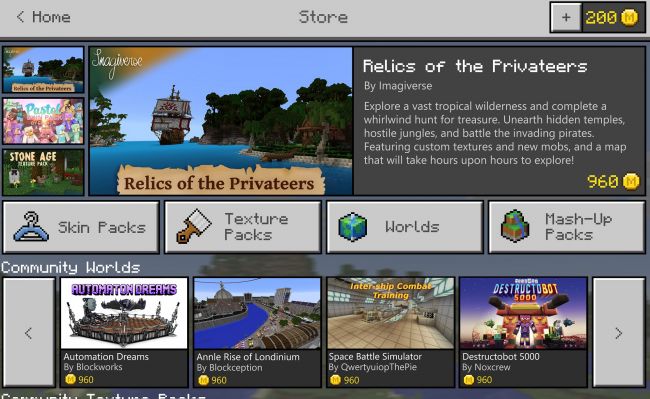 Price-wise, things aren't too crazy. Microsoft isn't offering any extortionate £80 currency packs Instead, you'll get the option to buy 300 coins for $1.99, 840 coins for $4.99 and 1720 coins for $9.99. Similarly to when Valve attempted to launch paid mods, Microsoft has brought mod makers on board to populate the market place. These creators will get their own cut of the sale, though exact figures aren't disclosed.

Eventually, this update will spread to other versions of the game, including Android, which will be having a beta later this month.

KitGuru Says: This sort of thing has been expected for a while, after all, Microsoft will want to make that $2.5 billion investment back at some point. While I'm never a fan of premium currency in games, at least Microsoft is limiting things to sensible amounts. No children are accidentally going to be buying $100 coin packs here, as we have seen in so many other mobile games.