Notch’s new $70 million pad has been recreated in Minecraft

You probably heard that last week, Notch, creator of Minecraft, went ahead and bought the most expensive mansion in Beverly Hills, coming in at $70 million. Well now the inevitable has happened and Markus Persson's new pad has been recreated within Minecraft.

The recreation was handled by Dan Bovey, who clearly put a lot of effort in to it. The accuracy is highlighted by a picture in picture video comparison. Bovey managed to capture every detail, right down to the candy room. In total, the mansion features eight bedrooms, 15 bathrooms and a nice big pool. 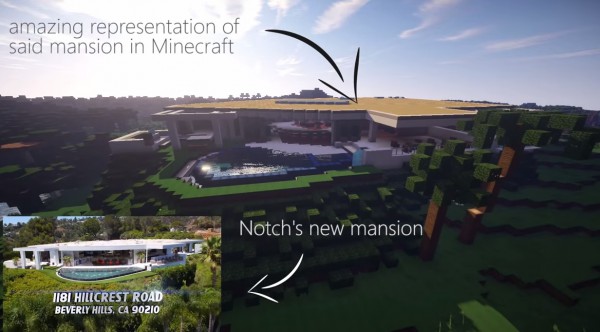 Bovey noted in his video description that a downloadable version of the map will be coming soon to his Planet Minecraft page, so you can all pretend to live like Notch.

It doesn't say how many blocks in total it took to build the whole house, which is a shame. I imagine its a fairly large number.

KitGuru Says: This was bound to happen eventually and I reckon we will see an improved version or two at some point in the future. What do you guys think of the recreation? Have any of you built something impressive in Minecraft before? I've never been much of a builder myself.