Back at E3 2016, Bethesda took to the stage to announce Quake Champions, a new take on the classic arena shooter with the addition of hero characters, each with their own unique abilities. At the time, we didn't know whether or not this would be a free to play or fully paid title but since then, id Software and Bethesda have looked over the options and come up with a solution- Quake Champions will be free at its core, but with the option to buy the game outright.

Speaking with Polygon this week, id Software Creative Director, Tim Willits, said that “at its core, it's a free to play game” but noted that the company didn't want to turn away those who would rather just own all of the available characters outright. 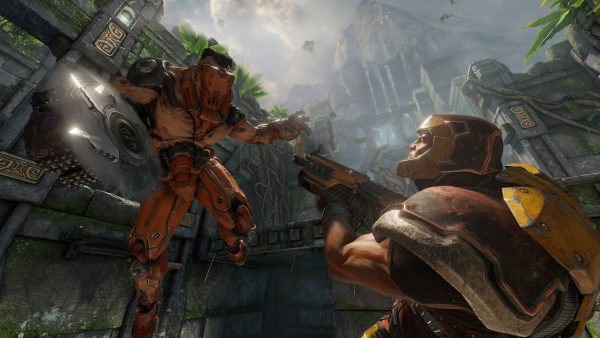 The Ranger, who you may remember as the lead character from the original Quake, will be free for everyone. From there, you will be able to earn in-game currency known as ‘favour', which will allow you to buy access to other characters for limited amounts of time. This way, you can try out new heroes without spending any real money on the game.

However, if you would rather just have access to all of the characters at once without worrying about time constraints, then you will be able to pick up the ‘Champions Pack', which will include full access to all characters that the game launches with. This does leave the door open for DLC characters in the future, which you would need to pay extra for.

Right now, we don't have exact prices for things like the Champions Pack, nor do we know how much in-game currency you can earn through regular play to unlock other champions for free. However, Quake Champions will be getting a closed beta in a few weeks time, so perhaps we will learn a bit more then.

KitGuru Says: Quake Champions is turning out to be a fun looking shooter but Bethesda is going to need to ensure its business model is balanced correctly to keep everyone on equal footing, whether they fork out for the Champions Pack or not. How do you guys feel about Quake Champions' proposed business model? It sounds good on paper but until we know pricing it can be difficult to judge.