Much like Bethesda’s The Evil Within, Warner Bros’ upcoming game, Middle Earth: Shadow of Mordor will also have a high Video RAM requirement for ultra textures, a screenshot of the game’s PC graphical settings has shown.

If you want to play Shadow of Mordor on ultra then you’re going to need a pretty high end card as apparently there is a 6GB VRAM requirement, meaning that users may need a very specific GPU in order to play at full detail settings. To make things worse, that’s the recommended requirement for 1080p, rather than 4K, a resolution that you would expect to eat up that much VRAM. 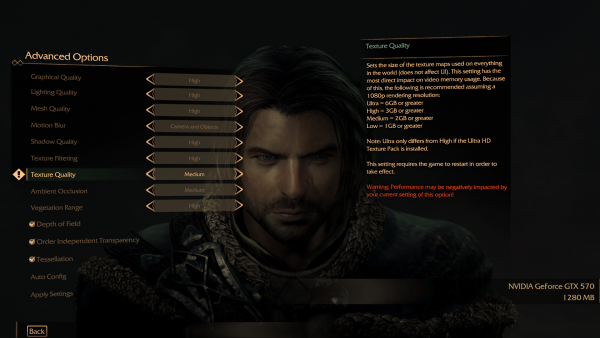 Flagship cards from both Nvidia and AMD currently only ship with 4GB of VRAM, with the exception of the GTX Titans and some specific custom made GTX 780 and AMD R9 290x cards.

We’ve already had some reason to doubt the quality of Middle Earth: Shadow of Mordor’s PC port as Warner Bros refused to send out PC review codes before launch day, while outlets with console copies can start publishing reviews ahead of launch this week.

However, there is also the possibility that the PC version of this game is fine and maybe this is all just a horrible mistake in wording on the game’s settings pages. Although, that may be unlikely.

Warner Bros has yet to comment on this so it looks like we are going to have to wait for the reviews to hit to find out if the PC version of Shadow of Mordor is actually any good.

KitGuru Says: A 6GB VRAM requirement seems pretty ridiculous, especially considering very few GPUs on the market are packing that much. What do you guys think of this? Is this making you doubt the quality of the PC version? Could this have something to do with the PS4’s 8GB of onboard GDDR5 memory?