Several weeks following its announcement, Square Enix has decided to retract its pre-order scheme for Deus Ex: Mankind Divided, following fan disapproval. The previous scheme would see customers allowed to pick one of two rewards in five separate tiers. Pre-order bonus tiers were unlocked depending on how many people were pre-ordering the game. If Square Enix got the amount of pre-orders it wanted, the game would release four days early.

Other bonuses included skins, an extra mission, the soundtrack, and a comic book. The publisher has since taken on board the negative feedback it received: “We’ve spent a lot of time reading through all of your comments, working to understand how we can try to make things right for you,” the publisher said in its own blog post. 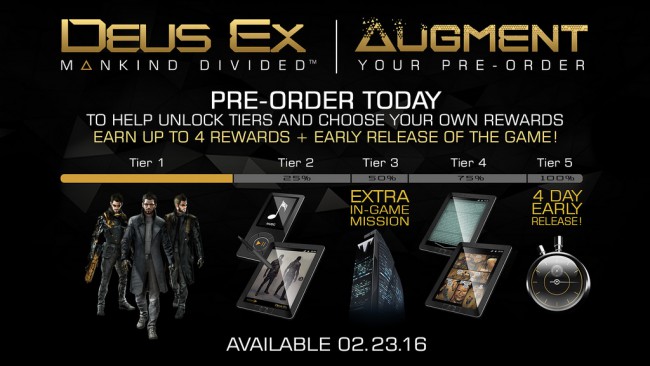 “After much thought and reflection, we decided to close down the program and make all incentive content available to anyone who pre-orders Deus Ex: Makind Divided or purchases a Day 1 edition of the game.”

So now instead of an unlock system, those who pre-order the game or buy it on day one will unlock the following things:

The game’s release date will now be fixed at the 23rd of February, rather than offering four days of early access to the title. The changes have been automatically applied to all pre-orders of the game.

KitGuru Says: It seems that quite a few people took issue with the ‘augment your pre-order’ program. It was an interesting experiment but it obviously didn’t pay off in the way Square Enix had hoped, publishers may just have to get used to the fact that people don’t tend to want to pre-order games anymore.