Steam’s top selling games of 2017 have been revealed

Steam is essentially the home of PC gaming at this point, so if you want to see what games did well this year, then there is no better place than Steam's top seller list. This week, Valve published its list of the top 100 selling games on Steam over the last year, featuring some new additions as well as some older releases.

The top seller list has been split into three tiers, Platinum, Gold, Silver and Bronze. The Platinum tier consists of 12 games in total:

The surprising addition to me is Ghost Recon Wildlands, which didn't necessarily earn the highest review scores. However, it seems that the co-op gameplay proved fun enough to get players in. PUBG is obviously a no-brainer for this list, as are titles like CS:GO and Dota 2, which are consistently among the top games played on Steam. 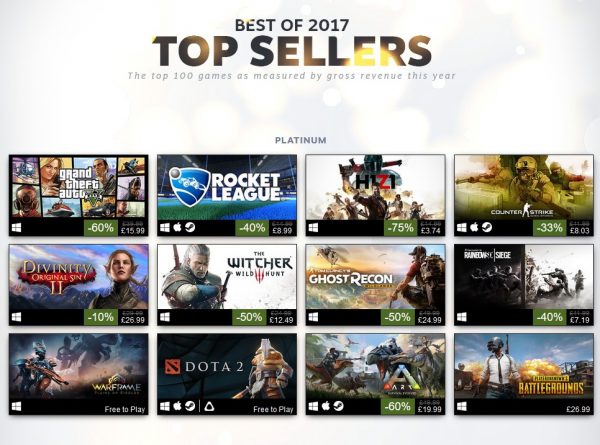 The Gold tier is also impressive, Fallout 4 is still selling high more than a year after its release and The Elder Scrolls Online seems to have made some strides. Nier Automata is part of the Gold tier, which is great news for fans hoping to see Platinum Games increase its presence on PC. Assassin's Creed: Origins made the cut, as did Dark Souls 3, For Honor, Civilization VI, Stellaris, Middle-Earth: Shadow of War, Total War Warhammer, ARMA 3 and Call of Duty WWII.

KitGuru Says: I'm particularly pleased to see that The Witcher 3 made the best seller list this year, despite originally coming out in 2015. Divinity Original Sin 2 was also a nice surprise, proving that there is still plenty of interest in classic-style RPGs.