There is a $10 million edition of Dying Light

We have seen some pretty crazy special editions of games over the years but Techland has really been pushing it with Dying Light. Not only was there a £250,000 edition of the game previously, which nabbed the buyer a custom-built zombie-proof shelter, but now there is a $10 million edition of the game.

Dying Light's Spotlight Edition costs $10 million and comes with the promise of a speaking role in a Dying Light movie that may not exist yet. You will also get some professional acting lessons from Rodger Craig Smith and get to go on the screening tour for Dying Light: The Movie. 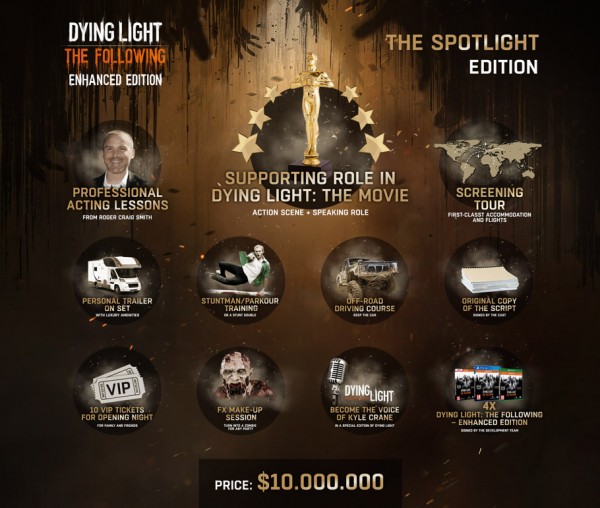 It doesn't end there, you will get your own on-set trailer for the film, some stuntman/parkour training, an off-road driving course, an original copy of the script for the movie, an FX make-up session, ten VIP tickets to the film's opening night, a chance to voice act in Dying Light and finally, you will get four copies of the actual game.

Considering that we didn't really know that a Dying Light movie was even in the works, this special edition seems to offer a lot of ‘out of the blue' perks.

KitGuru Says: I would love to know if anyone buys these crazy special editions of games. I thought the £250K edition of Dying Light was crazy but the Spotlight Edition takes things to a whole new level.