Trials on Tatooine lets you wield a lightsaber in VR, launches today

If you currently own a virtual reality headset like the HTC Vive, then you are probably keeping an eye out for interesting new experiences you can get your hands on. This week, Star Wars: Trials on Tatooine is launching for free, giving Vive owners the chance to wield a lightsaber in VR.

Being a lightsaber demo, the motion controls of the HTC Vive are required so for now, there is no official Oculus support but when Oculus Touch comes out later this year, that may change. There are developers out there who already have access to Oculus Touch so unless there is some form of DRM in place, perhaps someone will manage to get it working ahead of time. 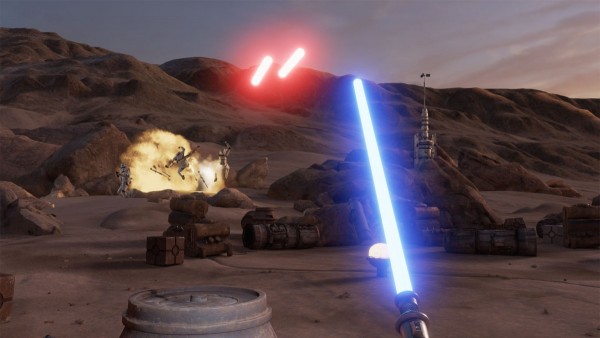 Trials on Tatooine is a first-person “cinematic virtual reality experiment” built by LucasFilm as well as Industrial Lights and Magic, so it’s not a full game. However, it will give you the chance to hold off the empire by deflecting blaster shots.

The demo will be launching on Steam at some point today. At the time of writing, it is currently not listed, so check back in a few hours’ time and it may be available.

KitGuru Says: As a big Star Wars fan myself, I would love to give this a go. Unfortunately, I am Vive-less right now so I’ll just have to hear about it through other people. Do any of you own a Vive already? Will you be giving this a go when it comes out later?