Twitch VS Dark Souls managed to beat the Asylum Demon

In case you hadn’t heard, after successfully beating Pokemon, Twitch has since moved on to a new challenge with Twitch plays Dark Souls. Now Dark Souls is a difficult game that requires pretty precise timing with your attacks, blocks and rolls- surely thousands of people spamming commands in to a chat box couldn’t pull this off? Well apparently, they just might.

Late last night, Twitch managed to beat one of the bosses in Dark Souls, the Asylum Demon. Now regular players will know him as the beast from the tutorial but for the mess that is the Twitch chat, this is quite the achievement. 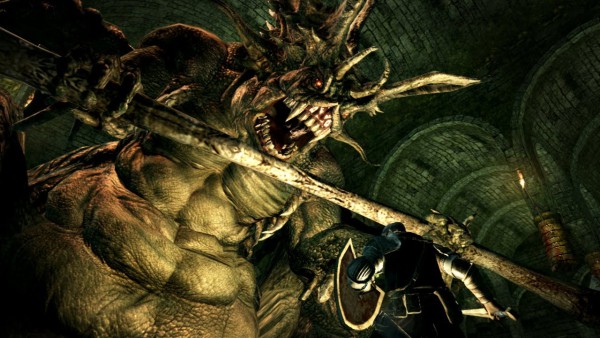 At certain points during the game, the chat has been slowed down, allowing for viewers to vote on commands, which allowed the Twitch chat to collectively string together enough of the right moves to take down the first big demon of the game.

You can see the clip of it above. Obviously as the game goes on, the bosses only get harder and this was just the first obstacle. Twitch still has a long way to go if it is actually going to beat Dark Souls. Now all we have to do is sit back and wait for Twitch to make it to the next area and fight the Taurus Demon.

KitGuru Says: Nobody is expecting Twitch to beat Dark Souls, but they are one boss down at this point so who knows, maybe they’ll manage . Given that its taken them a week to almost clear the tutorial though, this could take a while.