Each month, Xbox offers 4 free titles to those who are subscribed to the console manufacturer’s Xbox Live Gold service (and also those with Game Pass Ultimate). For the month of July, subscribers will be able to get their hands on WRC 8, Dunk Lords, Saints Row 2, and Juju.

WRC 8 FIA World Rally Championship is described as “the most complete and authentic WRC simulation yet”. The game features “a dynamic weather system with true-to-life physics” requiring players to prepare for each weather type in a different way. With “50 teams, 14 rallies, and over 100 stages” WRC 8 should please any fans of the real-world rallying series. WRC 8 will be available for the entire month of July.

Dunk Lords is a 2v2 basketball themed beat ‘em up, where you can “choose from 20 of the baddest ballers around, each with special attacks and insane abilities, and battle it out on 15 unique courts”. You can compete against your friends, or play the story mode when Dunk Lords becomes available to subscribers from the 16th of July to the 15th of August. 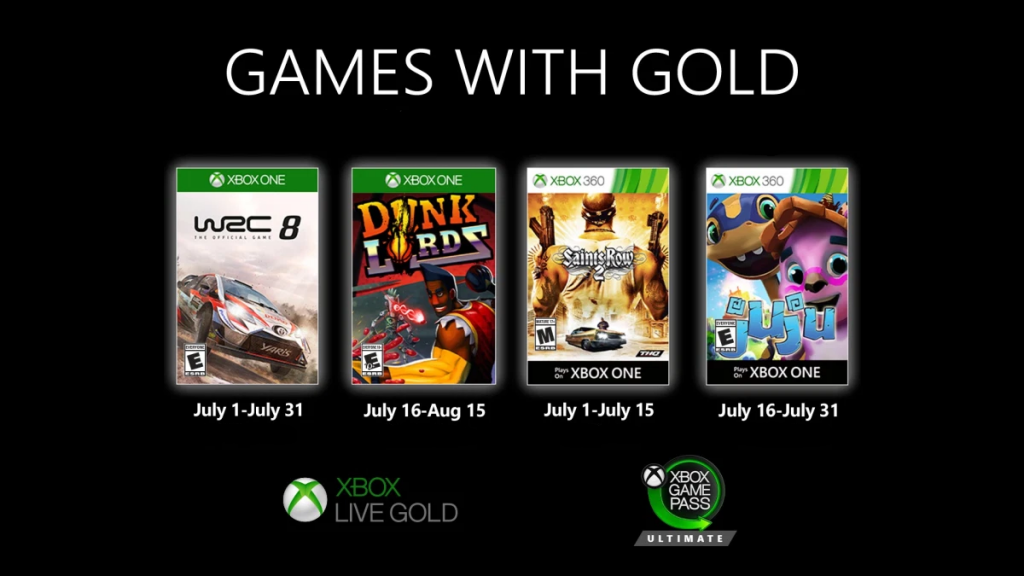 Saints Row 2 is available for Xbox 360 (and Xbox One users via backwards compatibility). Between the first and 15th of July, subscribers can get their hands on one of the franchise's more popular entries. Set in a time before the Saints Row series was about going to Hell and obtaining superpowers, Saints Row 2 has you “Help the 3rd Street Saints take back their city,” and “restore the Saints as the rightful kings of Stilwater.”

The final game on offer is Juju. Also available to both Xbox One and 360 users, this colourful platformer has you “embark on a dangerous and mystical journey with the shaman panda, Juju, and his lizard sidekick, Peya, to save both his father and world from an ancient evil”. Juju will be available between the 16th and 31st of July.

KitGuru says: What do you think of July’s offerings? Are you subscribed to Games with Gold? How does it compare to Game Pass in your opinion? Let us know down below.