Oh boy, the 21st century Space Race is about to begin in earnest. Not only is Jeff Bezos' Blue Origin looking to send tourists just outside of Earth's atmosphere, but it's building its own re-usable Low Earth Orbit launch vehicle too. This could see it compete directly for contracts with Elon Musk's Space X before long.

Announced in an email to mailing list subscribers, Blue Origin showed off the different sizes of a number of rockets that have been launched over the past five decades, going from the (comparably) small Antares and Soyuz crafts, right up through the Atlas V and Space X Falcon 9, to the big daddy of them all, the Saturn V, which sent men to the moon back in the 60s and 70s.

However it is what comes between the Falcon 9 and Falcon Heavy and the Saturn V which Bezos and Blue Origin were truly announcing: New Glenn. 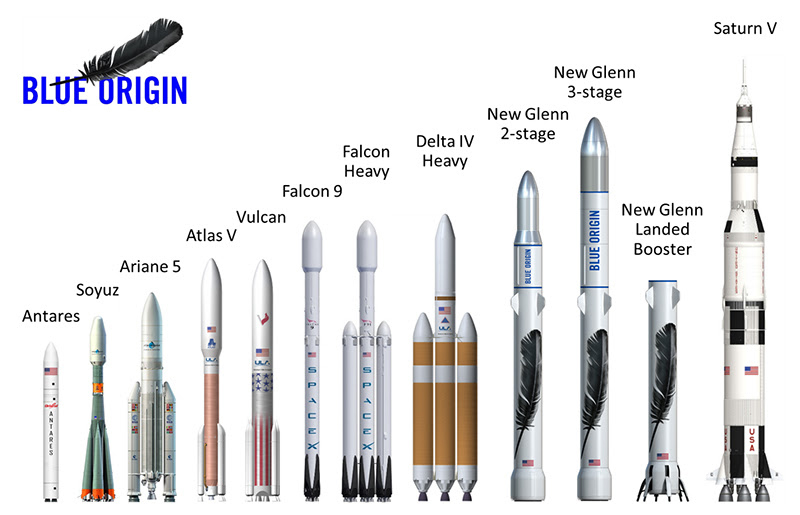 It also differs from Space X in that it uses liquefied natural gas and liquid oxygen for the first stage, rather than liquid oxygen and RP1, a highly refined version of kerosene. The three stage variant of the New Glenn booster is also designed to be capable of sending humans and cargo beyond Low Earth Orbit, somewhere no-human has been since the 70s.

However much like the Falcon 9, the New Glenn first stage is designed to be recoverable. It's hoped that this design can bring down the cost of space travel significantly, as the Falcon 9 looks to do.

Don't expect any of this to happen soon though. This is still the very early stages of the New Glenn's development, with Bezos claiming that the plan is to complete its first test flight before the end of the decade.

While Blue Origin works on that though, it's also said to be developing another rocket, known as the “New Armstrong.” Details on that are non-existent, but colour us excited to find out more.

KitGuru Says: This really is about as close to a superhero movie as we can get in the real world – if you discount Phoenix Jones – as this is literally two billionaires investing in super-advanced future technologies to take us further into space. If they get into solar sails, we might even see one build a monstrous laser too.

Share
Previous Who wants an Asus STRIX RX 480? We have one to give away
Next Do you want to voice act in Mass Effect Andromeda? Here’s how