Hot off the heels of dual lens camera technology becoming the de facto in high end flagship smartphones, Huawei is going one step further by introducing yet another lens. New images of the Huawei P20 have leaked, showing the device’s strange third lens, alongside the reveal that it will be coupled with artificial intelligence.

The new renders were revealed on Weibo, a Chinese social media network before being carried over to the west by Dutch website Telefoon Abonnement. While the images have yet to be verified in any official capacity by Huawei, it looks like users will be able to choose between a black or a blue variant. 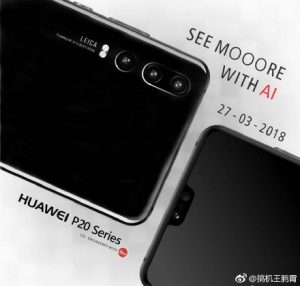 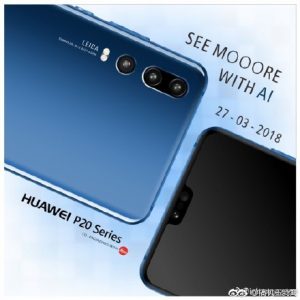 Both renders feature the rear of the smartphone more prominently than the notched front, showing just how important the three-lens camera is to the upcoming device. Driving that point home is its tagline of “See Mooore with AI,” which is the same line seen on the company’s invite to its Paris press conference on March 27th where the P20 is expected to be unveiled. Now, it is clear that the three ‘o’s likely represent the three lenses.

Previous leaks of the smartphone align with the device’s notched front, however the rear is noticeably different which suggests that the flagship device will be available in different models similar to that of Samsung’s Galaxy S9 and S9+. Instead, Huawei is expected to run with a standard, Pro and Lite version of the device.

Leaker Roland Quandt tweeted out that the P20 Pro model is expected to be priced at €899, while the standard P20 will be €670 and the P20 Lite will cost €369. The Pro version is the one speculated to carry the unusual three-lens rear camera, with the standard housing the dual lens instead. So far, it is unknown what the Lite variant will sacrifice in order to keep its price distinctly lower.

Huawei has yet to officially unveil the smartphone, so it’s best to take this information lightly until the device’s expected launch on March 27th.

KitGuru Says: Huawei is certainly going to want a win on its hands with the P20, as it’s already landed itself in hot water by prompting fake reviews for its Mate 10, which incidentally launched without a carrier in the US. I am unsure if more is generally better when it comes to lenses in comparison to the technology behind it, but if the AI is utilised correctly, Huawei could be onto a winner. Do you think three lenses are too many?