Rumours swirl around a secret Pixel 3 device untouched by leaks

Despite Google’s upcoming Pixel 3 range being one of the most anticipated launches of the year, reception towards the increasingly leaked Pixel 3 XL has been noticeably cold. Many believed Google has little left to surprise during its October event, however a recent move from the company suggests that there might be one secret left untouched by the leaks.

Leaks of the Pixel 3 XL have certainly left a bad taste in people’s mouths, from its intrusively thick notch to its 4GB of RAM – an outdated amount for a premium flagship phone expected to sit around the £1,000 mark.

Google has been approaching critics and YouTubers who have produced scornful material against the leaked device, asking to use their clips during its Pixel event. Jon Prosser of Front Page Tech was one such recipient of the request, who took the chance to tell his story to Express while free of a non-disclosure agreement (NDA).

Someone specifically from Google’s hardware team reached out to Prosser in order to obtain permission to use his clips surrounding the Pixel 3 XL during its event, on the front page of its YouTube channel and elsewhere. Prosser claims that he is not the only content creator that has been contacted by Google, each of which maintained that the firm wanted access to particularly scathing clips that questioned the Pixel 3 XL's design. 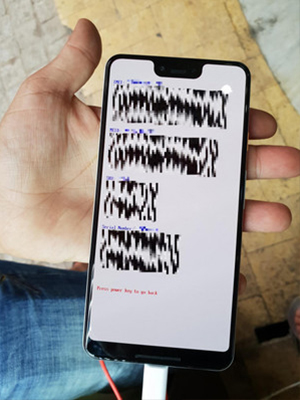 A company asking to use the footage of those that have commented on a leaked product is quite common during launch events, but it's unprecedented just how bold Google has been to potentially utilise such damning stories from noticeably agitated critics. Prosser stated that he “can’t tell you what clip they asked for” as he isn’t allowed, however his curiosity was piqued as to what Google might have in store.

“Every time I talk about the Pixel 3 XL, I end up yelling. I end up screaming at Google, calling them names, swearing. It’s a whole thing,” says Prosser. “So why would Google play a clip of me yelling at them about a phone they are about to announce?”

The common belief, which Prosser poked at himself, is that Google has a third iteration of its Pixel 3 line-up that hasn’t been unveiled by the leaks but could possibly act as the company’s flagship. There have been rumours surrounding the Pixel Ultra smartphone since Google lifted the lid on its second generation, however nothing came to light surrounding such a device. More recently, hints point towards a notch-less, bezel-less device within an Android P beta webpage update and an advertisement for Madden NFL 19, which could potentially be the mysterious new handset.

“I’m sorry, but why in the hell would Google roll a montage of clips, of YouTubers yelling at them, saying how terrible the phone looks, how embarrassing the leaks are, and then go ahead and announce the terrible looking phone? Why would they do that? Unless the phone they are about to announce isn’t the one we have been talking about.”

People have been speculating for quite some time that the leaked Pixel 3 XL is simply a marketing rouse intended to detract from its competitors, specifically Apple. Brandon from This is Tech Today cites a handful of sources that claim that the “security for asset management” been higher for Google’s next-generation handsets, but the leaks will supposedly intensify during Apple’s iPhone event in order to pull some of the attention away in the form of public FCC filings.

Brandon's sources remain unverified and a lot of this information remains uncorroborated, meaning it should be taken with a large pinch of salt. On the other hand, the Pixel 3 XL has seen an unusual amount of leaks in the run-up, from a Google insider carelessly leaving their prototype device in the back seat of a taxi to appearances of the smartphone on the black market. If it isn't a bait-and-switch to replace the Pixel 3 XL we currently know, then would Google really risk cannibalising its own product?

We will find out what Google has planned on October 9, be it what we’ve come to expect over the months or some crazily elaborate scheme to throw people off.

KitGuru Says: I truly am hoping that Google has something else in store, as I’m really not a fan of the current Pixel 3 XL that we’ve come to know over the past few months. Would you like to see Google pull the cloth from underneath us?

Previous PUBG falls below 1 million peak concurrent players for the first time in a year
Next Win two tickets to EGX and some Aerocool goodies! (closed)