Microsoft is making its own Android launcher

Microsoft has opened up to working with Android over the last year or two. The company is all set to bring Cortana to Android when Windows 10 launches and now it is working on its own Android Launcher, which could end up being its most significant step in to Android so far.

The launcher is currently known as the ‘Arrow Launcher' and it is in closed beta right now. In order to actually use it right now, you would need to request an invite for the Google+ community. The launcher includes three main pages, one for ‘people' like your contacts and phone number, a main home page, which is where you will find apps. 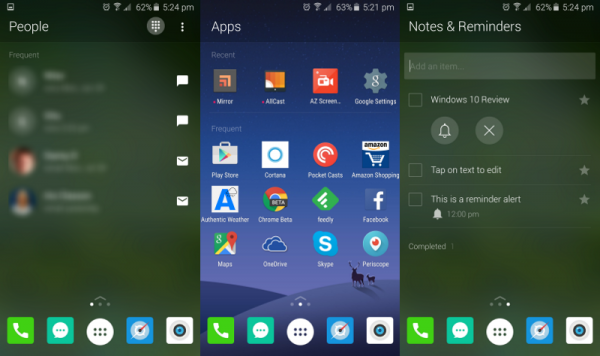 Apps on the main home page will be split in to recently installed and frequently used. Finally, there is a notes and reminders page, which will allow you to quickly set up reminders for later and take notes on the fly. Then at the bottom of each page will be a dock for you to place apps on, which is pretty standard in Android launchers.

It seems Microsoft's aim is to keep things simple, keeping a look similar to stock Android along with some useful features- the quick access to notes is a pretty nice touch.

KitGuru Says: Microsoft failed to really steal market share away from Android and iOS with Windows Phone, so now the company is taking the fight to their doorstep with apps and services of its own for each platform. Do any of you currently use an Android Launcher? I tend to stick to the Nova launcher whenever I'm on Android.