Apacer on Tuesday unveiled a lineup of new DDR4 SO-DIMM memory kits for high-performance laptops. The new kits have up to 64GB capacity and can operate at clock-rates of up to 3000MHz. The new modules are designed for Intel’s new mobile “Skylake” central processing units and high-end gaming and workstation PCs on their base.

The Apacer Nox DDR4 memory kits – which consist of four 16GB DDR4 memory modules – are rated to run at 2400MHz, 2666MHz, 2800MHz and 3000MHz frequencies with 1.2V voltage. Each module is based on 16 hand-selected 8Gb memory chips. The modules are built on black printed-circuit board. 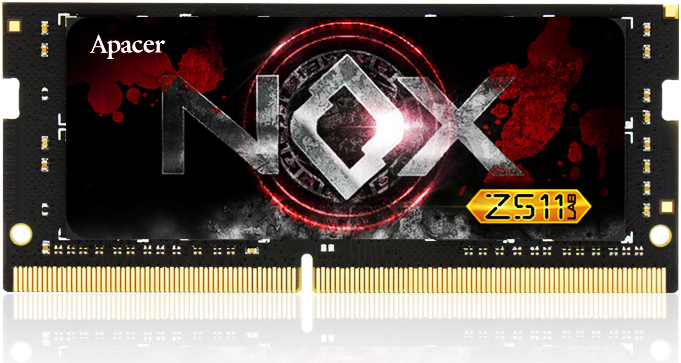 According to Apacer, the Nox memory kits were designed by the company’s Z501 lab, which was established in early 2015 to develop high-end PC components, namely memory modules and solid-state drives.

Pricing of Apacer Nox memory modules with 16GB capacity is unknown and will be disclosed later this month. It is highly likely that Apacer will start to sell the 16GB products after Intel Corp. starts to sell its Core i7 processors for laptops with unlocked multiplier.

It should be noted that far not all laptops support four SO-DIMM memory modules.

Previous Halo 5: Guardians will use dynamic resolution tech to stay at 60fps
Next Sony slashes price of PlayStation 4 at Tokyo Game Show