Motorola, the company that is about to become a part of Lenovo Group, plans to introduce its all-new smartphone – Moto E – on the 13th of May, 2014, in London. The handset will be positioned below the Moto G and will be very affordable, yet, rather powerful for everyday tasks. The company wants it to be a global success.

Motorola has already sent out invitations to the event to select media. The flyers clearly state that the company plans to introduce a smartphone that is “made to last” and “priced for all”, which indicates a handset that will not get outdated shortly, but will be priced affordably enough to reach broad audiences.

“Connect more people to the world’s information and each other, and they can do great things,” reads the Motorola’s statement. 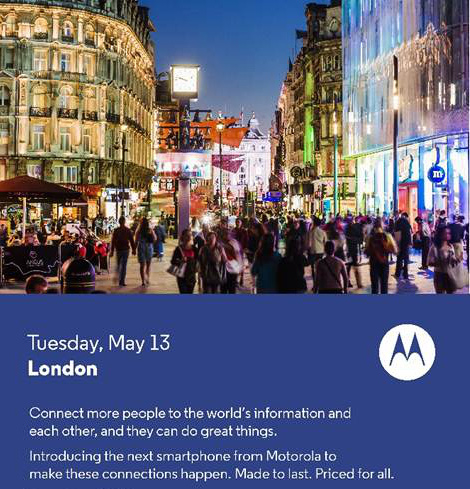 Unlike many of its rivals, Motorola is not pursuing primarily the high-end of the market with smartphones that compete against Apple iPhone or Samsung Galaxy S. Both its up-to-date models – Moto X and Moto G – are relatively affordable. Such strategy has its pros and cons, but for mainstream devices it means that Motorola will treat them like others treat high-end handsets, i.e., Motorola smartphones receive timely software updates and can be customised.

Official specifications of the alleged Moto E are unknown, but Xataka.com suggests that the new smartphone will feature 4.3” display with 1270*720 (720p) resolution, a dual-core system-on-chip with 1GB of RAM, 5MP camera, 1900mAh battery and Google Android 4.4.2 operating system. The device will reportedly be just 6.2mm thick.

If the specs are correct, then the Moto E will be a very inexpensive device aimed at the entry-level market. Keeping in mind that it is launched in London, expect it to work across the whole world and to be compatible with loads of networks. Such universal model means very high-volume production, which may result into lower costs.

Motorola did not comment on the specifications of the device.

KitGuru Says: Since Motorola is only about to become a part of Lenovo, the Moto E is clearly a part of Google’s strategy for smartphones. Going forward it is highly likely that Lenovo will try to make Motorola a halo brand to grow its presence in the U.S. and Europe, so inexpensive models will hardly be a part of the future portfolio.