New Mac Pro stock not due until March or April

Without doubt, Apple’s new Mac Pro workstation is impressive both inside and outside. Unfortunately, its availability is pretty scarce at the moment even in the U.S. According to a media report, the product will be available for purchase in Apple’s own stores sometime in March or April.

At present Apple sells its Mac Pro workstations at its online stores in the U.K. and the U.S, though good luck getting one before the next wave of stock arrives. There are a few lucky people who pre-ordered their Mac Pros several weeks ago and obtained their desired desktops back in December, but today it is impossible to purchase an Apple Mac Pro and get it more or less immediately since even Apple’s own stores do not have them in stock.

Electonista however has learned that the new Mac Pro will be available in Apple stores sometimes in March or April. 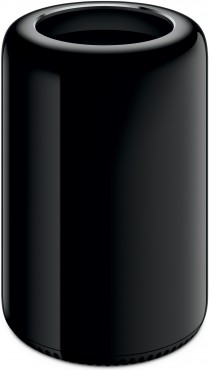 The new Apple Mac Pro can be powered by four-core, six-core, eight-core or 12-core Intel Xeon processors, running at Turbo Boost frequencies up to 3.9GHz. The new Mac Pro ECC DDR3 memory runs at 1866MHz in quad-channel mode, which provides up to 60GB/s of memory bandwidth, twice that of the previous generation Mac Pro. Two workstation-class AMD FirePro D700 GPUs with up to 12GB of video memory provide up to 7TFLOPS of compute power and up to eight times the graphics performance of the previous generation Mac Pro. The latest workstation from Apple also features PCIe-based solid-state storage that delivers sequential read speeds up to whopping 1.2GB/s, which is more than double the SATA III based solid-state drives used today.

The price of the new Mac Pro starts at $2999 (£2499 in the U.K.), which is comparable to the cost of workstations from other manufacturers, but which is much higher than the price of high-end desktop PCs used for work and gaming.

KitGuru Says: The starting price of $2999 (£2499 in the U.K.) clearly describes a buyer of the new Mac Pro: a hard working professional who knows exactly what he/she needs. Ironic really considering Apple's old adage was that it was all about fun, while stuffy PC's were for work.