Apple had a big day yesterday, launching the new Apple TV, iPad Pro, iPad Mini and the iPhone 6S. There were so many announcements last night that this one may have slipped under the radar. Yesterday, Apple went ahead and halved the prices for its iCloud storage.

As a standard, every Apple user gets 5GB for free anyway. However, there are also a number of subscription options for those who need the extra space to store files. 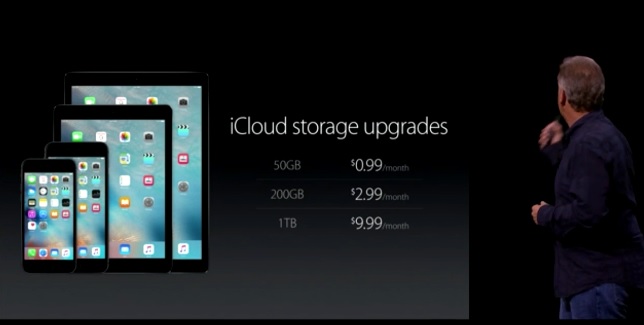 The new plan sees 50GB of storage available for $0.99 a month, which is now the lowest plan, whereas previously 20GB was the entry level option. From there, 200GB will cost $1.99 a month and 1TB of storage will cost $9.99 a month. Those two options were previously twice the price.

So Apple is getting pretty competitive in the cloud storage arena, with prices that could take on things like Drop Box or Google Drive.

KitGuru Says: As an iPhone and Macbook user, I rarely pay attention to iCloud. However, I do know many people who  find cloud storage useful, particularly in large amounts on the cheap. Do any of you have cloud storage set up?