The iPhone's home button may be doubling up as a joystick some time in the future if this new Apple patent is anything to go by. The patent describes a “Multi-Function Input Device” and was granted by the US Patent & Trademark office just last week.

The patent was filed by Colin Ely and Fletcher Rothkopf on the 9th of July 2013, which was quite a while back. Ely and Rothkopf are both design executives at the Cupertino based company. The joystick mode would be activated by pushing down on the home button, there would be a spring underneath the surface to pop it up, transforming the home button in to a makeshift joystick. 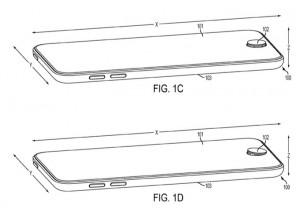 As you can see, the patent clearly details how the mechanism would work. It would be more accurately described as a thumb stick, like on a console controller, rather than a joystick.

This shows that Apple is acknowledging that some iOS gamers don't enjoy touch based controls and would rather have a physical item to use. However, it might be some time before we see this idea implemented in an iPhone, if it ever does, after all this idea was originally filed for all the way back in 2011 and Apple may have since moved on.

KitGuru Says: Apple's pop out thumbstick idea isn't bad but there aren't many games that only require one button, meaning that for more series games, a controller may still be necessary in order to avoid using touch screen controls.