Last year, Apple revealed its new Force Touch technology, which in its current form allows the company to build completely flat, stiff trackpads that don't actually press in for a click. Instead, a little engine under the trackpad uses vibrations to simulate the feeling of clicking a trackpad. However, this technology is set to evolve even further in the future with the ability to simulate different textures, surfaces and even control temperature.

Back in April last year, Apple filed for a patent showing off a new trackpad design that would use sensors, vibrations and temperature changes to simulate the feeling of different surfaces and textures with a trackpad. Now, Patently Apple has pointed out that this has been granted to the technology, meaning it may show up in a future Macbook. 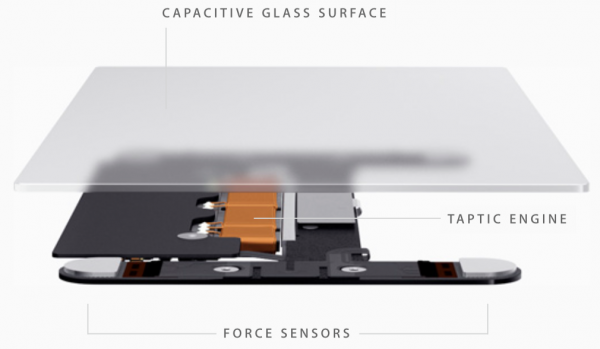 This would mean that those simulating a metal surface on their trackpad may find it cold at first but it would warm up after extended use. There has also been talk of Apple potentially simulating glass or wood grain too though that would be hard to imagine without seeing it first.

KitGuru Says: Apple seems to have big plans for Force Touch but it all seems to stem from its constant quest to make devices thinner. Either way, this certainly seems like an interesting departure from the norm so it will be good to see in action, should Apple actually bring it to market.