Rumours of Samsung’s re-entry into the smartwatch market has been running rampant over the past month, suggesting that the company was set to drop its Gear branding in favour of the popular Galaxy moniker. Now, the company has confirmed that the Galaxy Watch is real with a leaked listing on its own website.

The leaked Galaxy Watch seems to take after the Apple Watch, debuting in a 42mm rose gold model. Carrying the model number R810NZDAXAR, the particular product shown clarifies its Bluetooth functionality, suggesting that there is credit to the rumoured LTE version of the smartwatch. The listing has since been deleted, but not before being forever preserved by CNET’s Scott Stein. 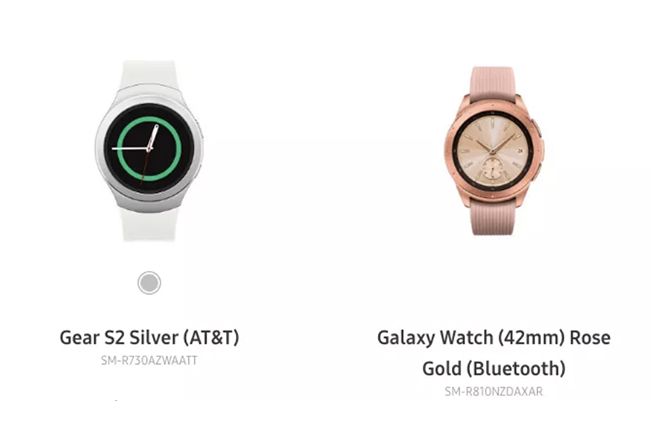 Not much else is shown through the product page, however the Galaxy Watch’s “R800” portion of its ID matches earlier reports on the product line’s name. Although this might lend credit to other rumours, it’s worth taking the remainder with an extra dash of salt just in case. The device is believed to come in two sizes, from a bulkier 1.9-inch version to a smaller 1.3-inch variant, both of which are likely to use Samsung’s proprietary Exynos 7 Dual 7270 processor, powered by a 470mAh battery.

Early reports on the Samsung Galaxy Watch suggested that the wearable was set to ditch the company’s own Tizen OS in favour of Google’s Wear OS, however this has supposedly been debunked by the folks over at ZDNet. Instead, Tizen OS will help the Galaxy Watch with its new and improved health and fitness functionality, corroborating rumours that the new device will include a heart rate sensor.

Samsung is expected to debut the Galaxy Watch at the unveiling of the Galaxy Note 9 on August 9th.

KitGuru Says: Given that the Galaxy Note 9 is expected to be just another iterative upgrade, it looks like the Galaxy Watch could steal the show. Hopefully the year Samsung took out will prove useful in the smartwatch’s design, and fingers crossed it comes in more variants than rose gold, as I’m personally not a fan. Will you be picking up a Galaxy Watch?